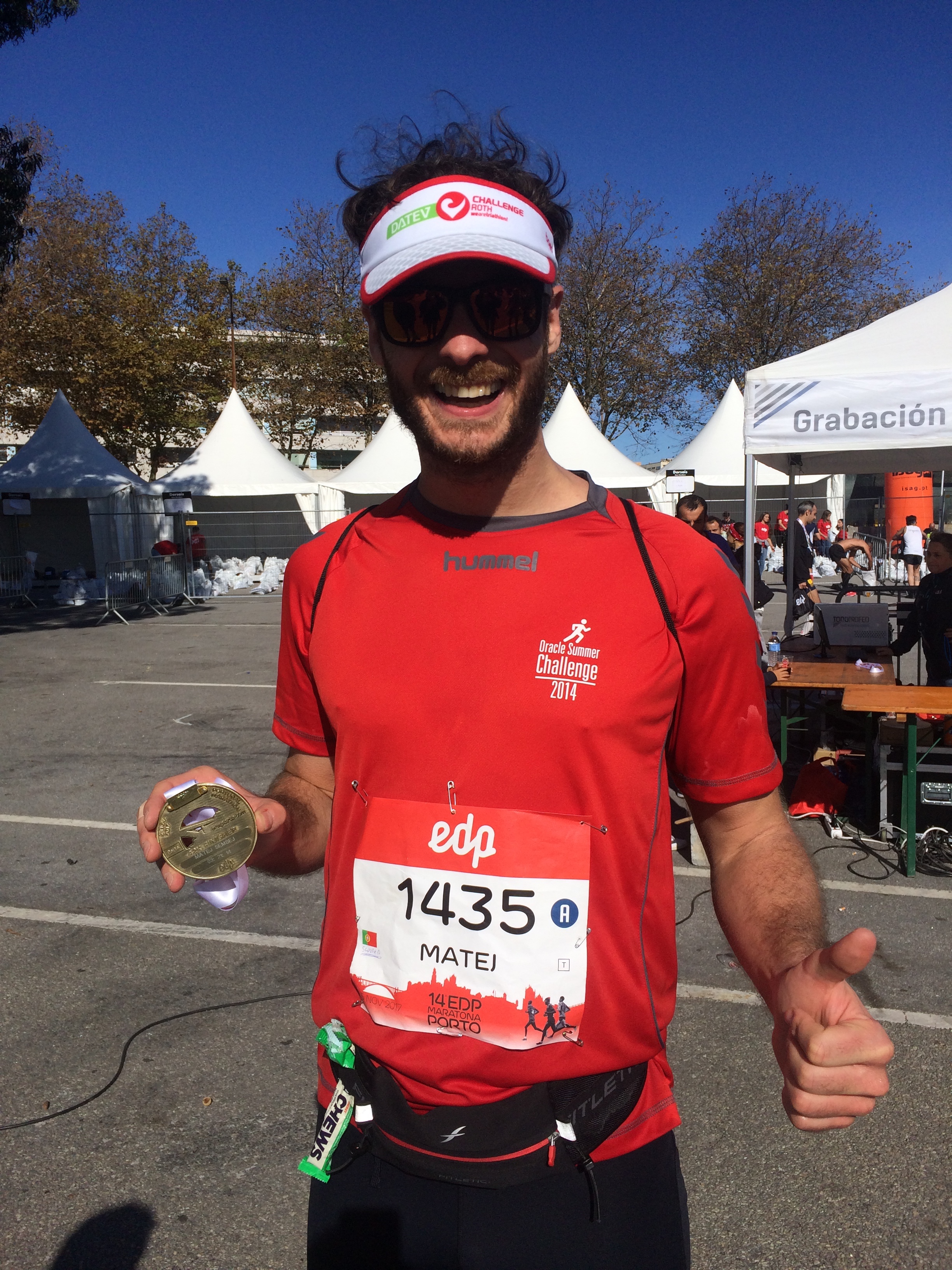 Within the years I established an end-season tradition which is running a marathon before the year’s end. Last important goal of the season which is at this time already rich on results and experience, I always tackle it in a bit more relaxed mode comparing to the traditional 42km I do always in May. For the 2017 fall I’ve chosen Porto where the race is ran always in November and was looking forward even more – I have never been to Portugal before.

Arriving to Porto on Thursday and the race being held on Sunday, we had plenty of time to discover the different corners of the city (about the city itself I write here). When attending the races in a place different to your home town it’s always very helpful to find the accommodation close to the start and finish of the race. Since the Porto marathon starts and finishes at the Porto City Park (Parque da Cidade), we’ve chosen for our stay an area called Matosinhos where you will find plenty of places to rent via airbnb. Since this is also the perfect area for runners, just shortly after landing and arriving at our place I ran out. I did few slow kilometers at the beach and the same time through the park. There is not many places where you can visit during one short run both, a very sunny beach and a beautiful city park. Matosinhos gives you this, make sure you try it out. It was something! The ocean on your right, salty smell, sun… suddenly you enter the park and you are running below the trees, surrounded by chicken, duck and swan, stretching at the bank close to a lake and then running back to the beach. I liked it so much that I had to repeat this amazing slow pre-race run also on Friday, this time one of my friends I travelled with joined. She complained about the pace but she did enjoy as well. If you are a morning runner you know it, the best you can do before breakfast is to run out. Matosinhos beach and city park run – unrepeatable. 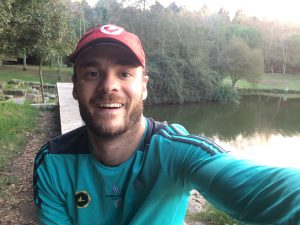 Another advantage while staying close to the start of a race is the fact that you can sleep a bit longer, especially when (European) marathons usually start at 09 AM. I am leaving our flat at 08:30 and just before nine I am waiting for the start. The whole start area is well organized: placed on a large square just at the beginning of the park (on its side) there is everything you need. From changing your clothes, leaving your bag at the right place, visiting toilets and other necessary steps you have to do before the race. The walking meters to the running corridors are also well planned and if you would like to do some stretching or warm-up running before the start, it’s easy to do on the big road next to the start area. 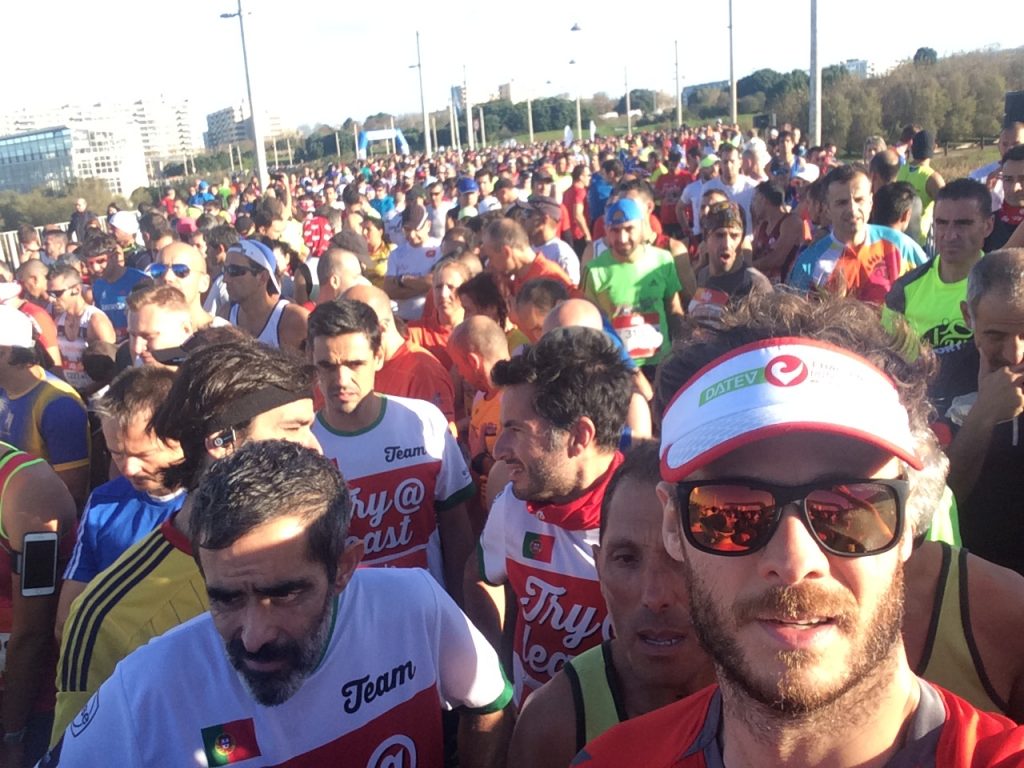 Standing at the start, the weather is already very sunny and warm (about fourteen degrees Celsius). It seems to be not the best running conditions, not today. Together with the wine and food of last three days I don’t believe I will be running especially fast, anything around 3 hour and 30 minutes will be a nice end of the Ironman season…

The race starts and I feel pain and cannot run as I would like to in the first two kilometers. Then I realize this is due the fact I didn’t pee before the start. Doing my duty behind a tree on the third kilometer, everything will be only better from that point. Now I am in my tempo, keeping with the pacemakers of 3:30, soon realizing I can run much faster than that.. So I run… and run.. and run… somewhere below 4 minutes and 30 seconds per kilometer. The course is stunning: along the sunny beach, with the salty breeze of Atlantic, I am enjoying every single meter. After spending first ten kilometers in Matosinhos (and looking with sadness at the restaurants I was visiting last days), we are later passing by the fort Castle of St. Francis Xavier (11km) and Castelo da Foz (14km). We are approaching the center part of the city, running  below its bridges, first Ponte da Arrabida (17km) and then through Ponte D. Luis (20km) to the other side. Here the race spends another nine kilometers before turning back to the initial side. This is the point where some of the fast runners can get into troubles, especially in this weather – we pass by a guy throwing out, swearing we are not going to make the same mistake. Planned nutrition is a must, especially under this weather conditions! We are back on the initial side, running below other two bridges Ponte do Infante and Ponte de Sao Joao (both just after 30km), the course turns by 180 degrees and approaches to its final phase. Until now I was still keeping with the pacemakers of 3:15 however at some point the hot weather and not-optimal nutrition of last days would start sending signals. And they came, now the race is taking revenge on me. Together with the wind which was now blowing straight into the face, the last twelve kilometers I really suffered. I experienced two crisis, before the kilometer nr. 35 – here the refreshment helped – but only for the next three kilometers. From kilometer nr. 38 I had again enough and had to walk for some meters. I was already sure at that time – this still looks to be a personal best improvement, again and in the same year as I have already beaten it. Last two curves, friends standing just before the finish, few more pictures and here it is, the final finish line of the season. The time: 3 hours 21minutes and 14 second. I improved my personal best by more than four minutes. Exhausted but very happy! 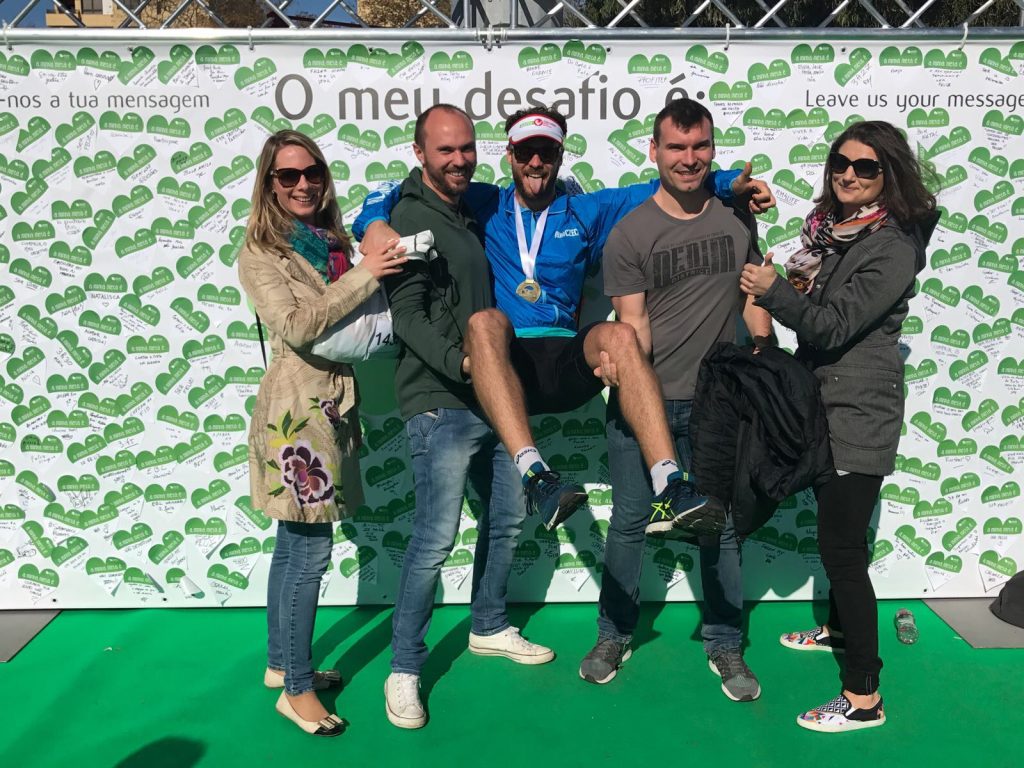 There is not a single bad word I could speak about the organization. Start corridors and the entire area was well-arranged, refreshments every five kilometers (ok, especially in this weather I needed to drink and eat every fifteen minutes so had something with me in addition), finisher pack and a beautiful medal. Later that afternoon I change my after-race tradition and instead of a pizza I am having a sandwich, salad and a cake. I take a beach-picture of the medal and follow my friends, who are already walking in the center, enjoying the free walking tour.

Marathon in Porto is a race which will easily give a very powerful experience for the season’s end. And if you don’t feel like running a whole marathon at the end of the year, try out at least running or jogging in the Matosinhos area. I can promise you will enjoy every single meter. 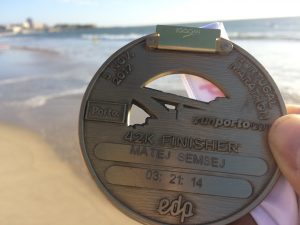