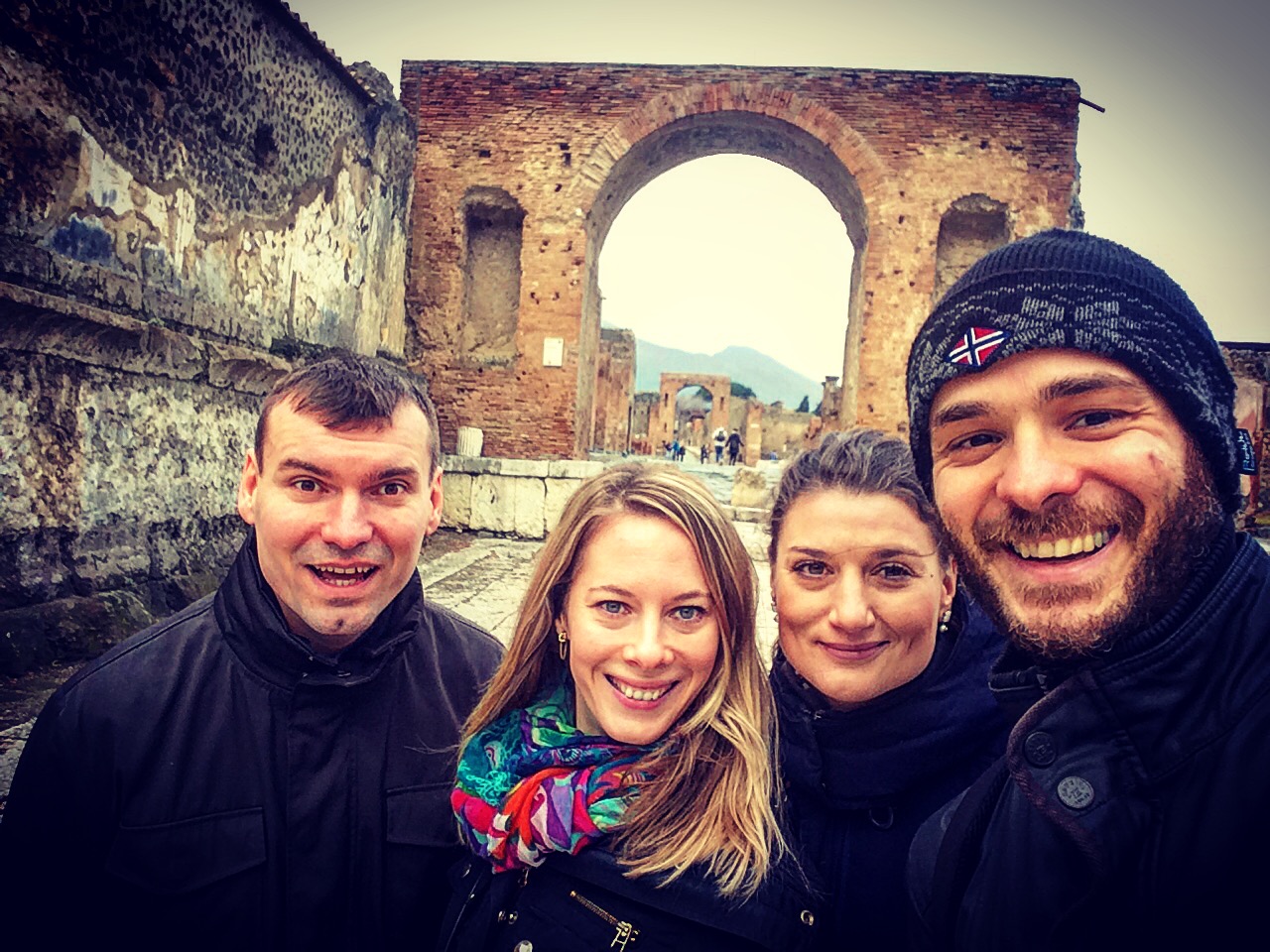 In our area, February is one of the coldest months, very suitable for travelling abroad. Our travelling group from Portugal got the heads together and voted in February 2018 for Naples. It is said, that everything below Rome is a completely different Italy and especially when you compare the prices, it cannot be less true. Such tasty, but the same time cheap pizza you will hardly find anywhere else, well, of course, pizza comes from Naples.

We landed from 3 different directions (Prague, Bratislava and Memmingen), despite the fact some of us had to change on the way, the city is easily approachable from every corner and the price of the ticket is also fair. Some of us had to suffer on unusual turbulence but that was the only surprise of the weekend. It is not too difficult to find your way out of the airport, all you need to do is to follow the signs which will lead you to the Alibus. This is a very comfortable and practical way of approaching the city center, for 5 Euro you will buy a ticket which is also valid for the Naples metro and other public transportation. The best is to get out of the bus at the main station Centrale, from here it is very easy to take a metro. We are not talking about a metro in the real sense, it is more a train structure system which doesn’t commute on time: at the platfrom you get the feeling that everything is well organized and time schedule is kept, until the moment when, few minutes before your train approaching, suddenly the time table shows that its either delayed or not coming at all. Very smart – if the city plans more of such delays, nice operational costs can be saved. Still better than introducing officially longer breaks which you then potentially need to keep. The way it works, you get the feeling it works well, until the moment it is delayed. Italian planning.

To be fair, our very first ride was on time, we even had to run. Since you have plenty of airbnb options, you can book directly in the center and for a good price. Our flat was not far away and just one train stop from the Centrale train station, thus the whole journey from the airport took few tens of minutes. At the first traffic lights we suddenly served as a subject of amusement, few drives were laughing seeing us waiting for the green light… and then also trying to cross on green. You will know this from other Italian cities too, don’t expect any following of traffic rules. You could easily again say: as more on south, as worse.

The flat we booked for the 3 nights was rather cold, but well positioned. Should you decide to travel to the south of Europe (Italy, Spain, Portugal) in winter, get ready for the accommodation being colder, while it can be very sunny and nice outside. Most of the flats don’t have a standard heating system you would know from your country and the air-conditioning either doesn’t work or you simply cannot start anything with it. Even though the landlord will be telling you it works fine, it is… simply not working as it should.  Never mind, somehow you will survive the night.

Just after the check in, we went out for dinner. We ordered way too much but we wanted to try as much as possible. Such fresh and amazing mozzarela you will hardly get elsewhere. The pizza, that was the heaven! I don’t remember eating a better pizza in my whole life. Pizzeria Dal Presidente is strongly recommended. 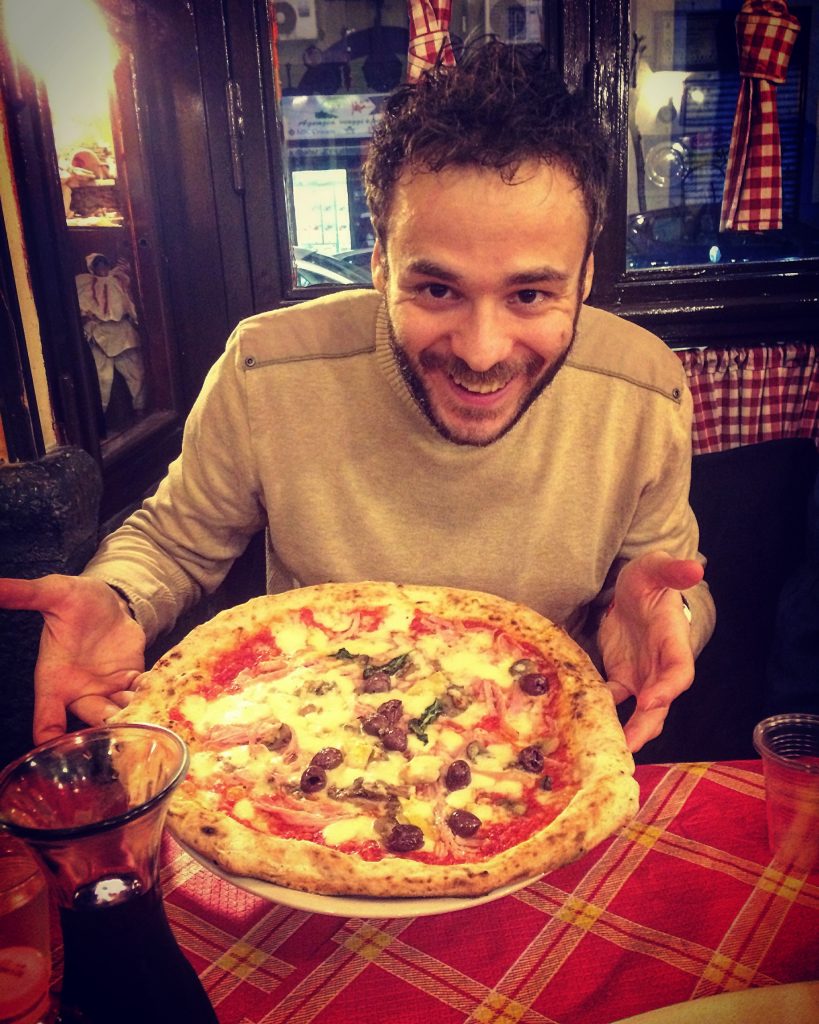 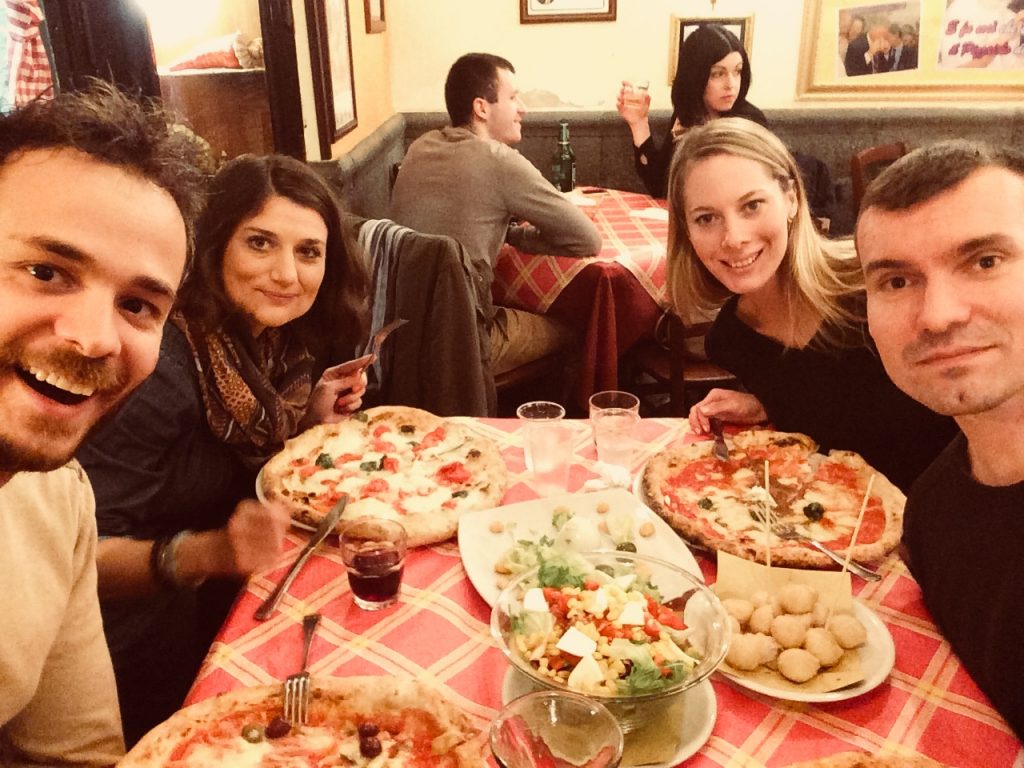 Our schedule for Saturday was full and loaded: breakfast, pick-up the BIB-number for the race on Sunday and mainly, visit Pompeii. Sweet breakfast with Italian coffee is a must! English might be a challenge (if you don’t visit a typical tourism trap), but we had an Italian speaker in our group, bingo! It is nothing brand new, that Italians are very friendly, smiley and talkative, especially when you have girls in your group… or you are from the country of Marek Hamšík. At the beginning of February SSC Neapol was still leading the Serie A, which also helped in the friendly conversation with the guys from the coffee shop. After the breakfast and after we picking up the race numbers for Sunday’s half-marathon, we finally jumped on a train to Pompeii.

Pompeii, the place where frisson is guaranteed

I think I can say that I have seen things in life already, thus I am able to compare. I can easilly say, that the ruins of Pompeii is one of the places, which you will never forget. The experience was even intensified with the cold windy weather. The journey from Naples is simple, if you jump on the right train. At the Centrale railway station you have to search for the Circumvesuviana trains, which are not part of the Italian national railway network. This is a regional network and options to buy tickets are also limited (you will not be able to buy them online). However, the options are quite good at the railway stations, for ex. at Centrale the Circumvesuviana trains have a separate platform with their own gates, it is easy to buy tickets at the stand just before the tourniquets. Before the Torre Annunziata Oplonti station check again, what train are you in. If you are sitting in the blue line you’re just fine – all you need to do is to get out at the Pompei Scavi station and the entrance to the ruins will be just accross the street. The green line will get you to Pompeii from other side, you can get out at the station Pompei but the first option is more comfortable. For sure, don’t try to ask an old Italian lady in English, if you are sitting in the correct train. If you finally do, what is guaranteed is a missunderstanding and your journey longer by 30-minutes. 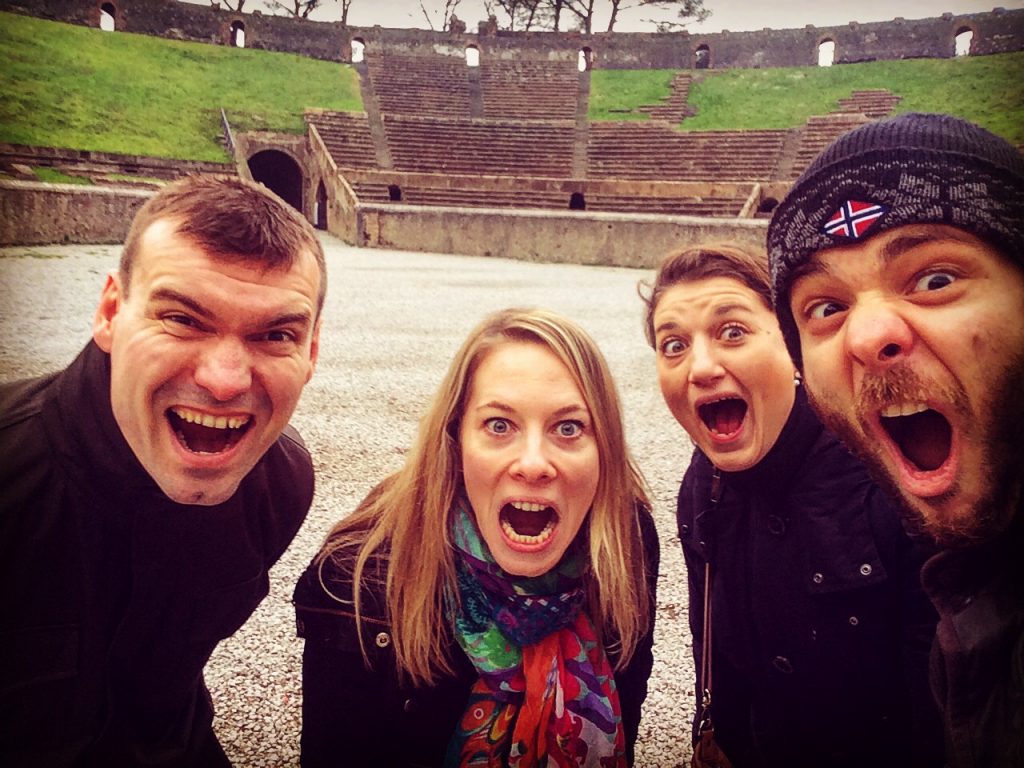 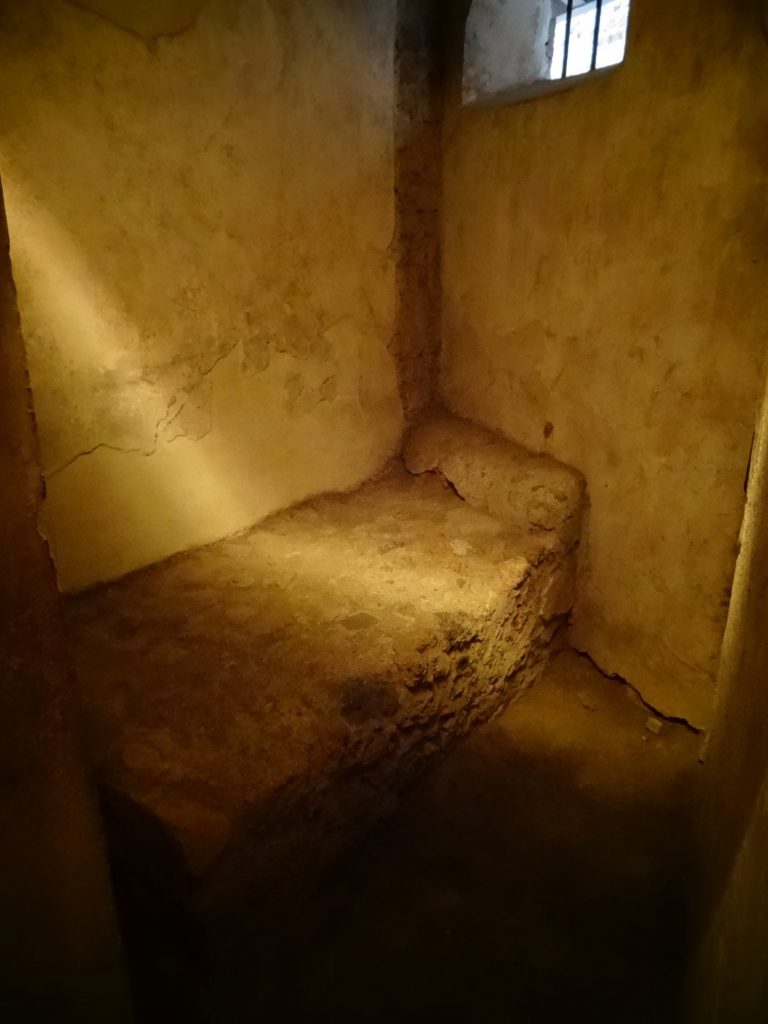 Whorehouse – with my 193cm I would suffer

The real experience at the ruins is difficult to describe with words. Should you be one of these people with creative immagination skills, you can build you your own picture about what happened in the city on 24 August 79 AD. The Vesuvius volcano, resting for past centuries, woke up. Destroying the city and killing most of its citizens (at the moment of eruption the city counted approx. 20 thousand citizens), the volcano allowed only very few people to run away on time. Pliny the Younger described his uncle’s involvement from the first observation of the eruption:

On August 24th, about one in the afternoon, my mother desired him to observe a cloud which appeared of a very unusual size and shape. He had just taken a turn in the sun and, after bathing himself in cold water, and making a light luncheon, gone back to his books: he immediately arose and went out upon a rising ground from whence he might get a better sight of this very uncommon appearance. A cloud, from which mountain was uncertain, at this distance (but it was found afterwards to come from Mount Vesuvius), was ascending, the appearance of which I cannot give you a more exact description of than by likening it to that of a pine tree, for it shot up to a great height in the form of a very tall trunk, which spread itself out at the top into a sort of branches; occasioned, I imagine, either by a sudden gust of air that impelled it, the force of which decreased as it advanced upwards, or the cloud itself being pressed back again by its own weight, expanded in the manner I have mentioned; it appeared sometimes bright and sometimes dark and spotted, according as it was either more or less impregnated with earth and cinders. This phenomenon seemed to a man of such learning and research as my uncle extraordinary and worth further looking into.

Pliny the Elder set out to rescue the victims from their perilous position on the shore of the Bay of Naples, and launched his galleys, crossing the bay to Stabiae (near the modern town of Castellammare di Stabia). Pliny the Younger provided an account of his death, and suggested that he collapsed and died through inhaling poisonous gases emitted from the volcano. His body was found interred under the ashes of the eruption with no apparent injuries on 26 August, after the plume had dispersed, confirming asphyxiation or poisoning.

We have been walking for hours in the city, which was supposed to be forgotten for many many centuries. Paradoxically, today we can be thankfull for the apocalypse in 79 AD. Without it, we would know only very little about the (Pompeian) ancient world, its daily routine, citizens, habits… It astonishing, to walk on the streets of Pompeii, imagining its daily hustle around, spectators in the theater, gladiators in the arena, campers in the city spa or customers in the dresshouse (yes, that one we visited too!). 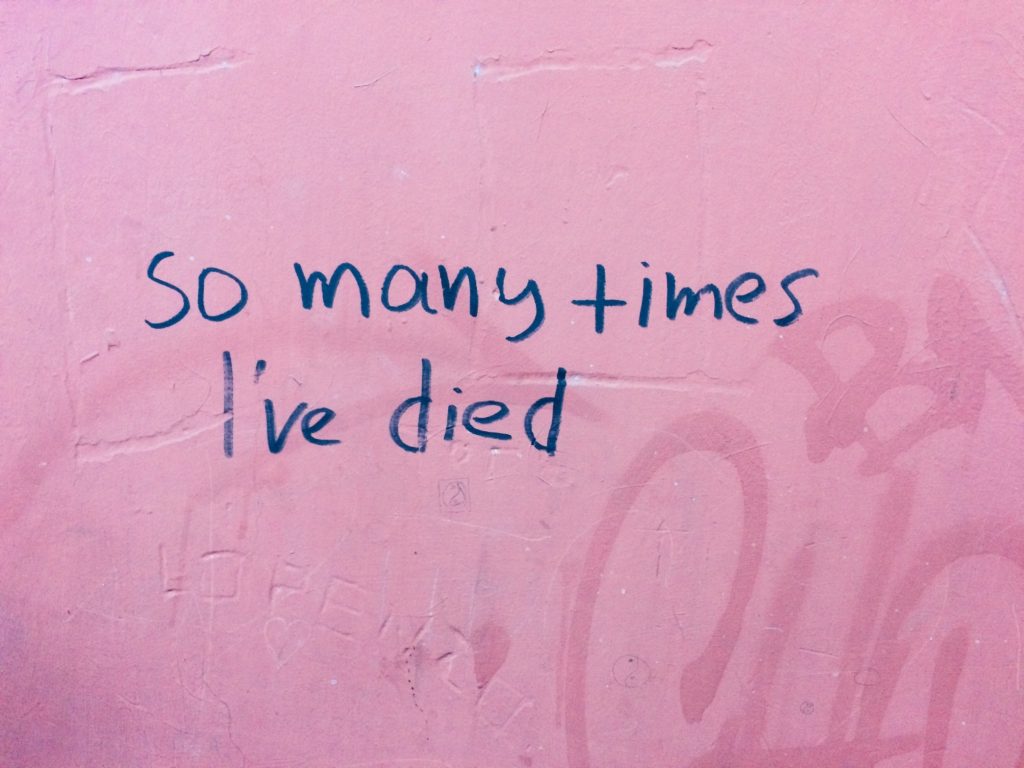 So many times I’ve died… Pompei

The waking-up time for Sunday was set very early, Napoli City Half-marathon was waiting. After the beautiful race we decided to spend the remaining day with hanging around the city center. Lunch time, again pizza time, of course. The weather got much better and we spent the afternoon with walking around the city, having a great time, enjoying excellent wine and tasty food. We walked almost 20 kilometers. In Naples, at every coffee or restaurant the visitors are very welcomed, the doors are wide open all the time. Be carefull to not be sitting too close to the entrance, otherwise you get a cold. 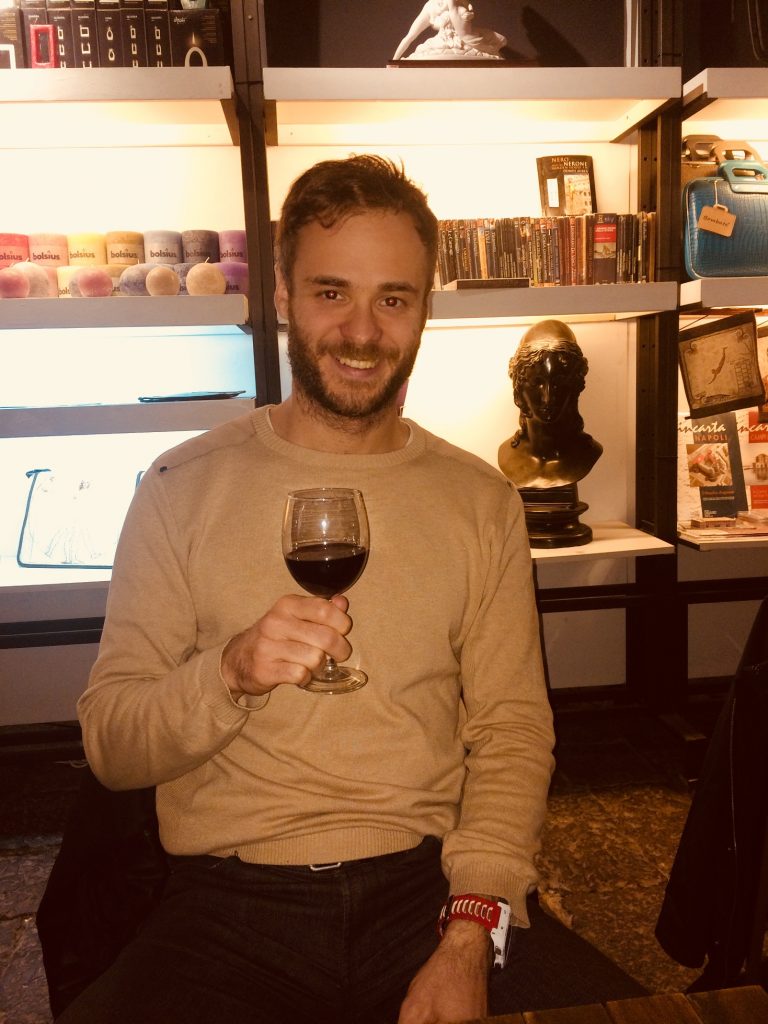 A glass of wine in a cellar of a museum, very original 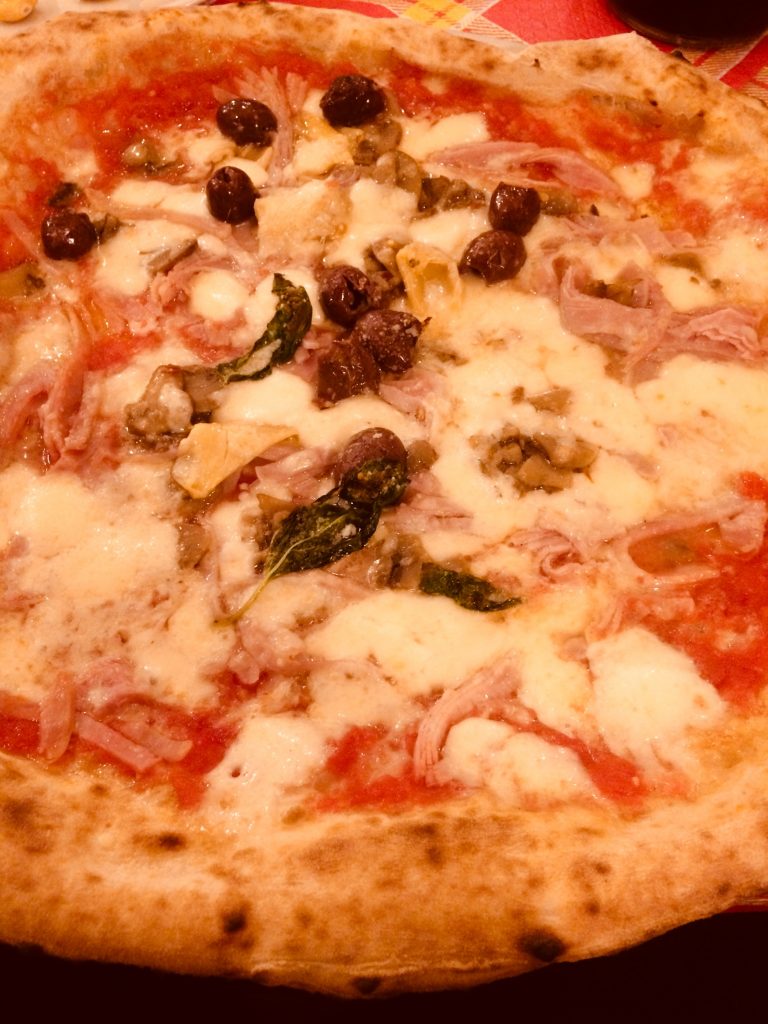 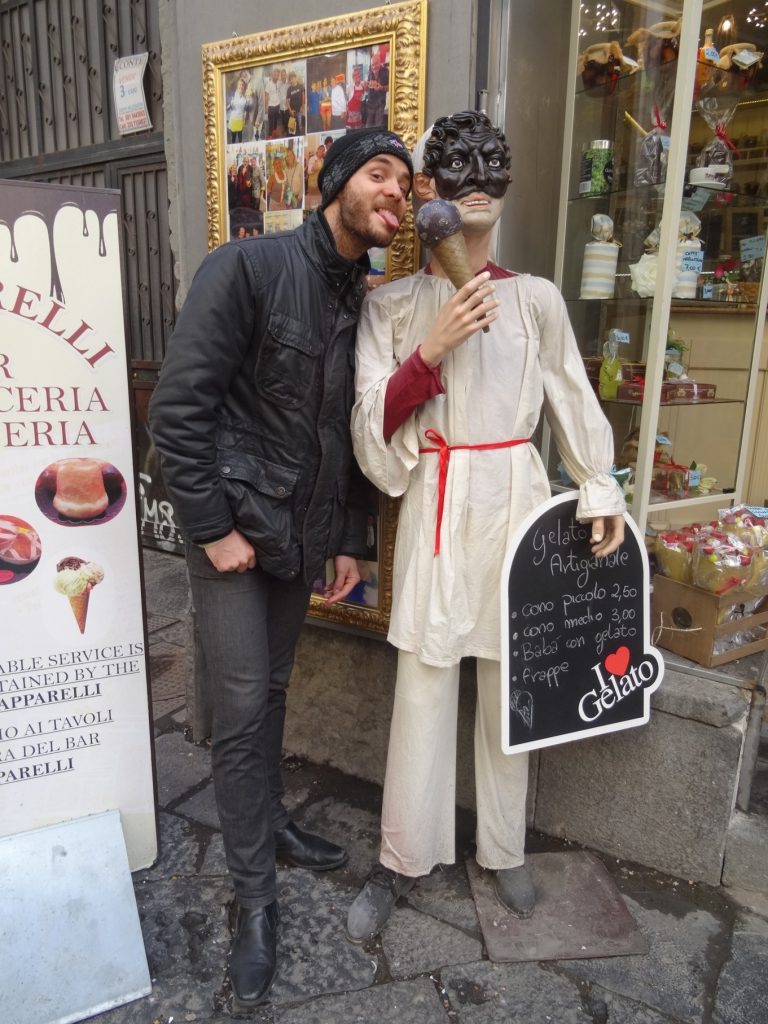 Another phenomenon (or phantom?) of the city where you can read a lot about on internet, is the safety. Different sources will warn you about the safety in Naples and about the child gangs which belong to the mafia Camorra. Here I need to repeat the first point of your travelling guidelines: don’t stand out, don’t call attention and don’t walk in dark side streets, use your common sense, and you will be just fine. During the whole weekend we didn’t face any trouble, although I am sure, the city was watching.

At the end, should you be interested about some sightseeing recommendations (which you fill find in any of the travel guides online), then for sure walk around the Castle Nuovo and the square Piazza Plebiscito, also along the sea and for sure, through tens of marvelous streets of Napoli. Where the moped or the car shows up in the moment, you would never expect it. Nip and tuck is not working here, you will have few seconds to jump by side. The same as everybody does, in Naples…

Runeller’s 3 not to miss for the end: