The Isle of Skye, the most beautiful hills of the world (Scotland part 2) 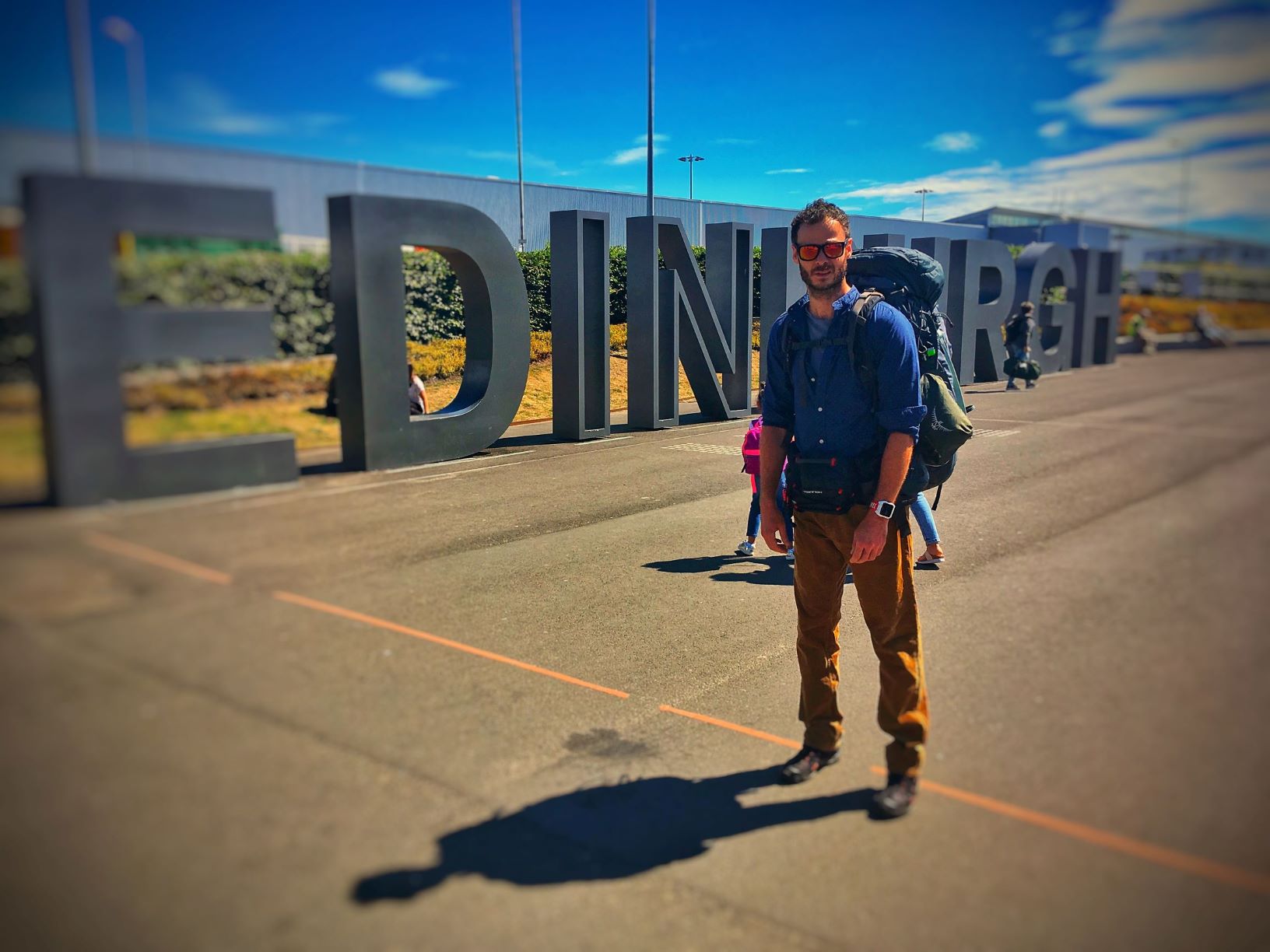 Visiting Scotland has been a dream since ever. At least from the moment I saw the first time the Braveheart movie. Running through these majestic hills and looking into the never-ending afar, which runner would resist!!? In summer 2018 this dream came true and I could scratch out the first item from my Runeller bucket list. This is my suggestion for a not-only-a-week-trip in one of the most beautiful countries in Europe.

From Prague you can easily fly for a very good price to Edinburgh, for example (but also to Glasgow). Because we packed also a tent and sleepers, we had to buy extra luggage but still, the price was very friendly – for two persons and two monster bags we paid not even 11K CZK (440 EUR). After a 2-hours flight we arrived at the Edinburgh airport, which is located just out of the city. To get to the city center it cannot be easier: taxis, buses, tram. We’ve chosen the last option, to get to the tram stop it took us 5 minutes of walking, straight on, you just have to follow the signs. A ticket to the last station York Place costs 6 pounds. In Edinburgh you will find all type of accommodation, from expensive hotels (100 – 300 pounds per night), up to the affordably priced hostels or other types of accommodation. We decided to travel in time and return to our university years – we booked the dormitory accommodation, which serves during the summer as a good alternative for the tourists. From our Destiny Student – Shrubhill to the city center it wasn’t more than few minutes of walking (maybe a kilometer away) and pricewise it was really lucrative. A night in a room for two, with its own shower and toilette cost 42,5 pounds. Very clean and very good; similar to what you would find in Czech rep. or Slovakia in a 3-star hotel.

Immediately after the check-in we decided to go for a run, which took us most of the afternoon. The best alternative to the mass-tourism trend. Later, we finished the day with a lovely walk: not even 15 minutes away we walked to the Calton Hill, a hill which arose out of volcanic activity 340 million years ago. You will find here few Scottish national treasures including the National Monument. Calton Hill is also the headquarters of the Scottish Government. Visiting the hill was a stunning experience, which not even the mass of the other tourists could ruin (still, it was less than during a day). We walked down the Calton Hill and continued through a very old cemetery Old Calton Burial Ground (opened in 1718), to finally reach the Waverley railway station. Here we had to pick up our train tickets for the next morning from the kiosk. Although I bought the tickets online few weeks before the trip, we still had to print them at the station before the journey. Finally, we ended up enjoying the Edinburgh Castle view, we were just fine from the far, due too many tourists at the castle. 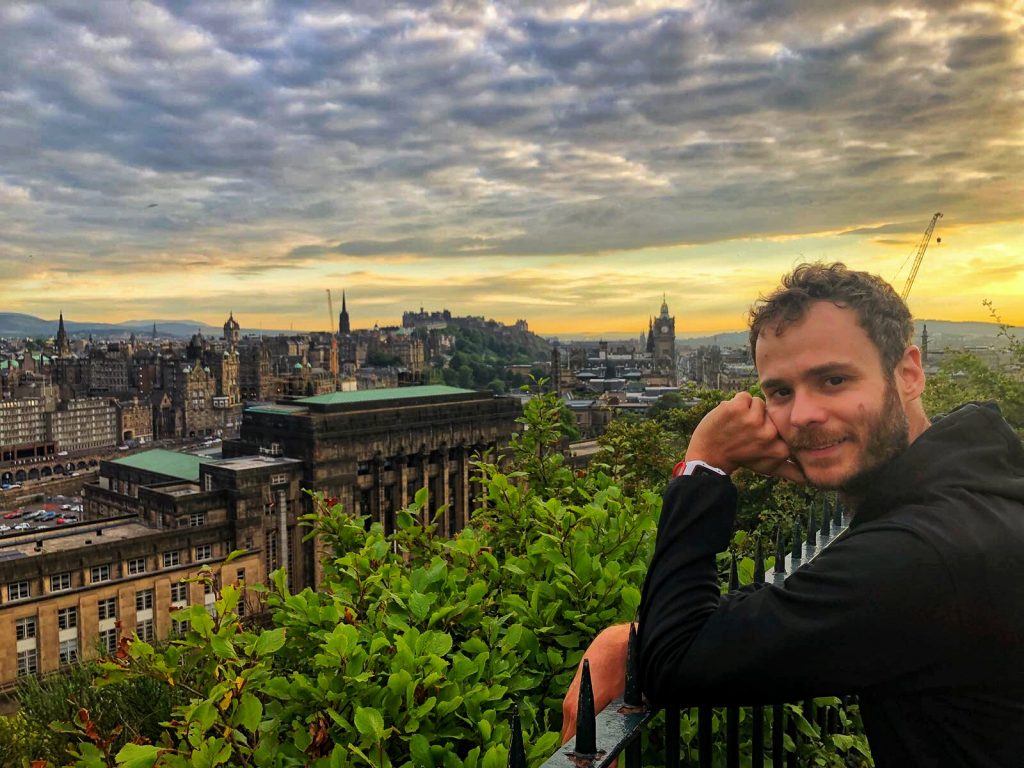 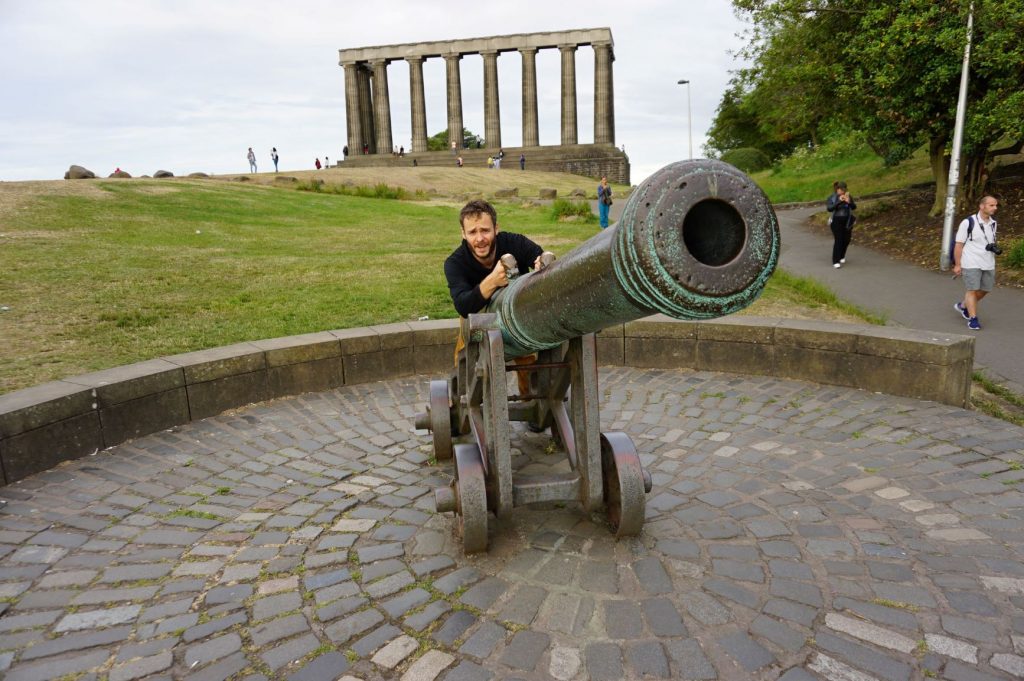 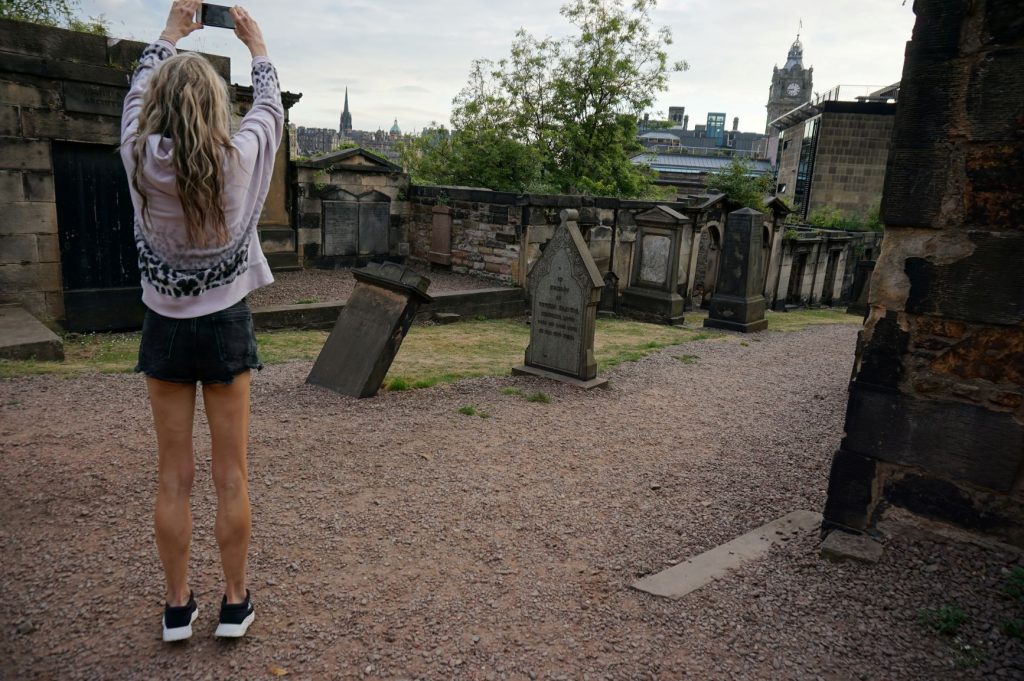 The city center offers a variety of restaurants, from the typical Scottish pubs (God bless fish and chips, fried cod and French fries) and fish & seafood restaurants up to many options of the international cuisine (Italian, Asian, Turkish, …). We ended up in a cozy Mediterranean (or better-said Turkish, as we could later notice) restaurant Meze Meze. Nice service, the waiter living in Scotland for 15 years already (not a friend of the current Turkish regime I can tell you), amazing taste. Don’t do the same mistake as we did – don’t order too much, you will regret, and you can start running again the next morning. Delicious!

After the walk back to our accommodation we lied down and died asleep within seconds – after a long time I slept without a break the whole night. In the morning, we had to catch a train to the city in the north, Inverness. For us it was enough to spend one afternoon in Edinburgh, however I can easily imagine spending few day in this beautiful city, you won’t get bored for sure.

The next morning we took a train to Inverness, the capitol city of Scottish Highlands. Although for Scotland it was extreme warm during those days, the train experience was a cold one. The Scots would normally turn the air-condition quite cold however this train was special, we almost didn’t make it. Should you travel with a 105-liter bag, get ready that you won’t have much space where to store it, for sure not above your head. Since the few slots at the end of the carriage were already occupied, my “monster” ended up travelling next to the door. No stress, no one will steal your baggage in Scotland (no Slovaks in rangeJ). Despite the cold the journey was nice and quick, most of the time we spent looking out of the window, of course. Three hours later we arrived to Inverness and went to find the accommodation (the offline map from Seznam rules!). The accommodation through Airbnb I booked met all the expectations of the unexpected experience – a garden caravan. The host was too late (I think he forgot) but his smiley face was the reason we didn’t find any energy to complain. The weather continued to be extraordinary (for a Scottish summer), hot and sunny, what could we do. Immediately after the check-in we went for a run. Amazing 10k along the water, fjord and through the Merkinch Local Nature Reserve. 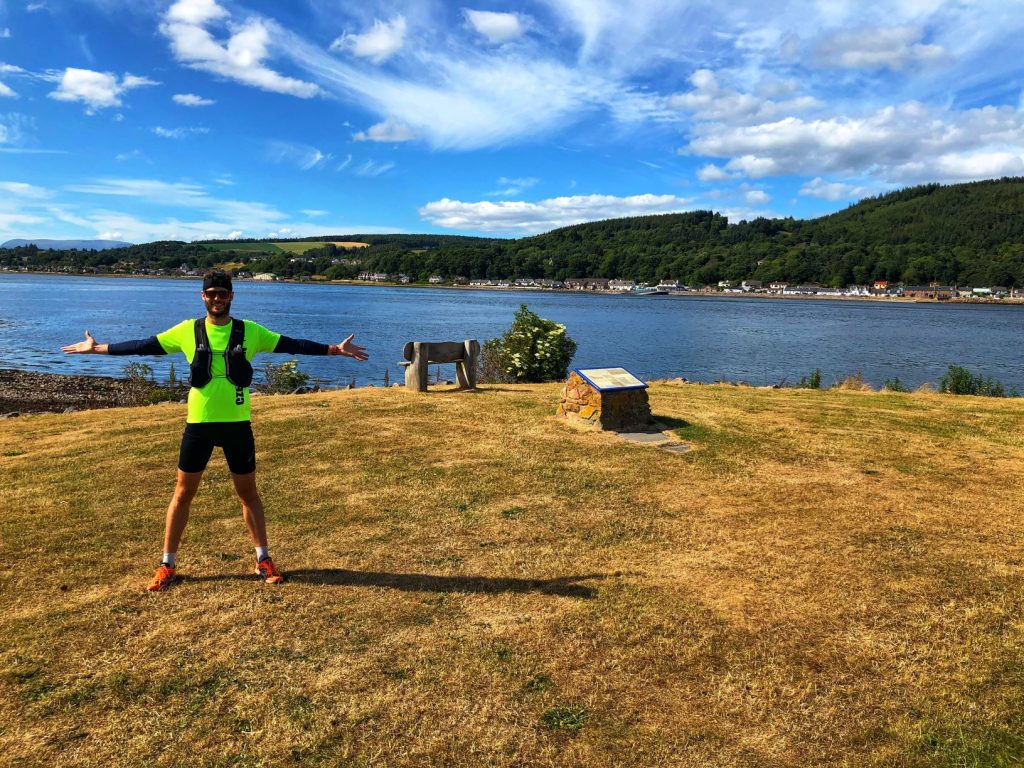 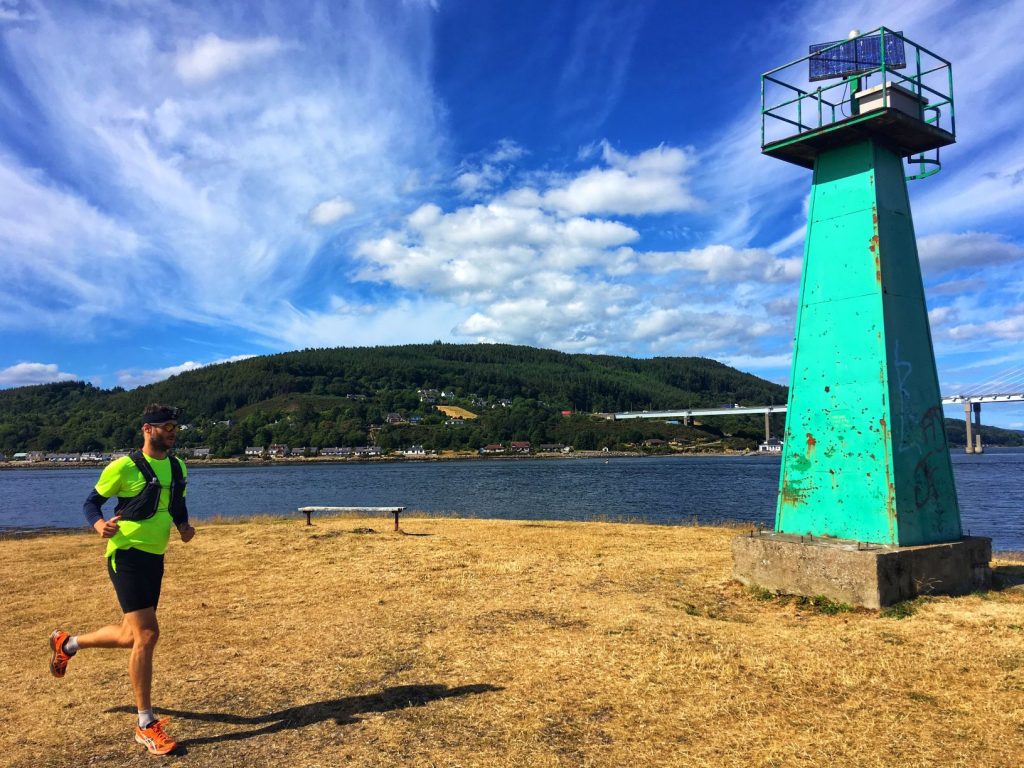 … in this amazing weather

Inverness is a 47.000 resident city on the river Ness, which flows here into the Moray Firth. It is also the city with the happiest life in Scotland, at least a research from 2014 says. Maybe also due the fact that nothing is going on here. Not criticizing at all, “nothing” can be amazing and you can enjoy the stay even more than in a big city full of tourists. Should you visit the Jamaican restaurant in the center, the cool waiter will explain to you why to relocate to Inverness from Glasgow, for example. Dominants of the city are the castle, cathedral and a small comfy city center. 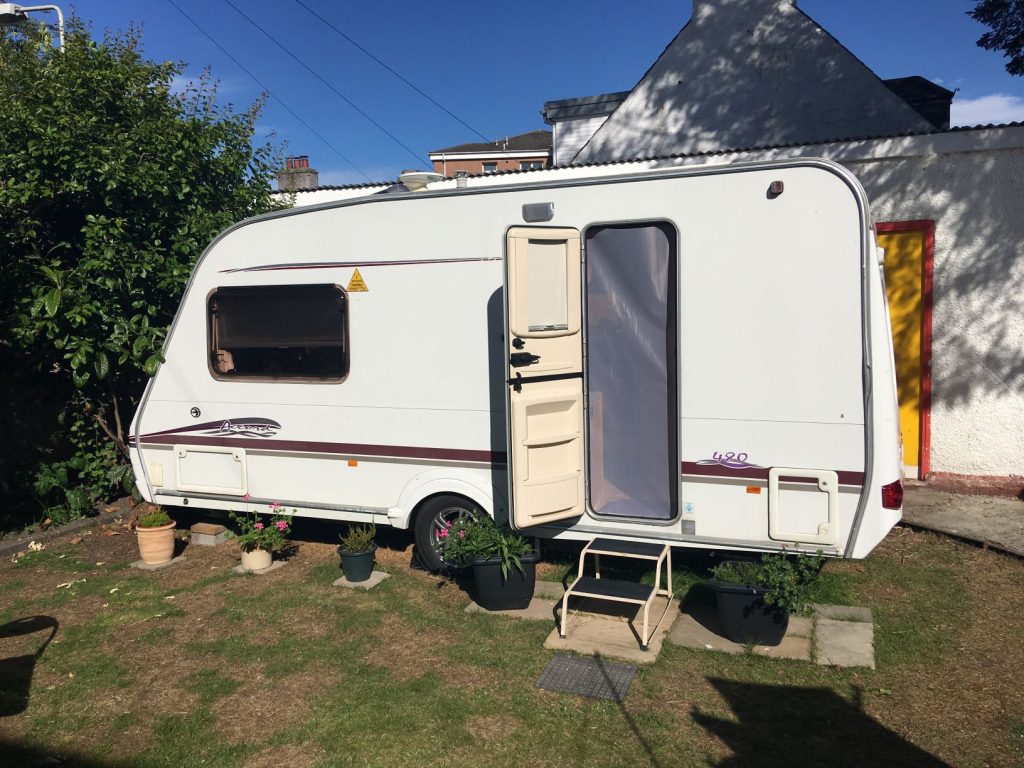 Night at caravan, must do! 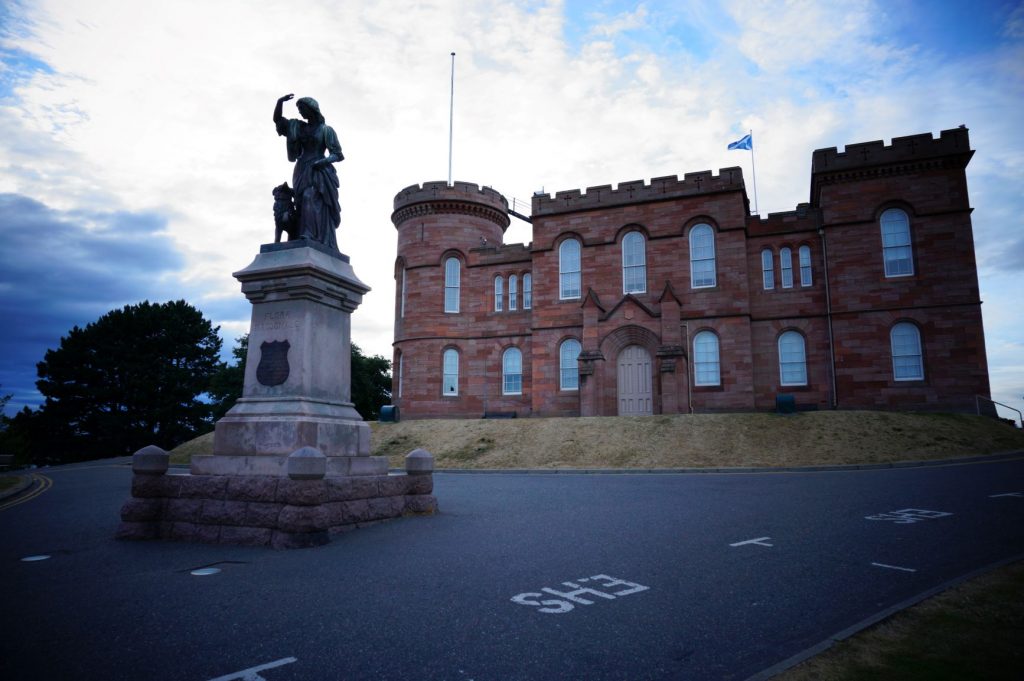 After a romantic rainy night in the caravan we jumped the next morning on the bus heading to The Isle of Skye, the main target of our Scotland trip. In Inverness we spent 2 afternoons: before leaving for Skye and after the return, before we jumped on the train brining us back to Edinburgh. Inverness was a nice experience and especially the 10k run is something we will remember.

Runeller’s 3 not to miss for the end: