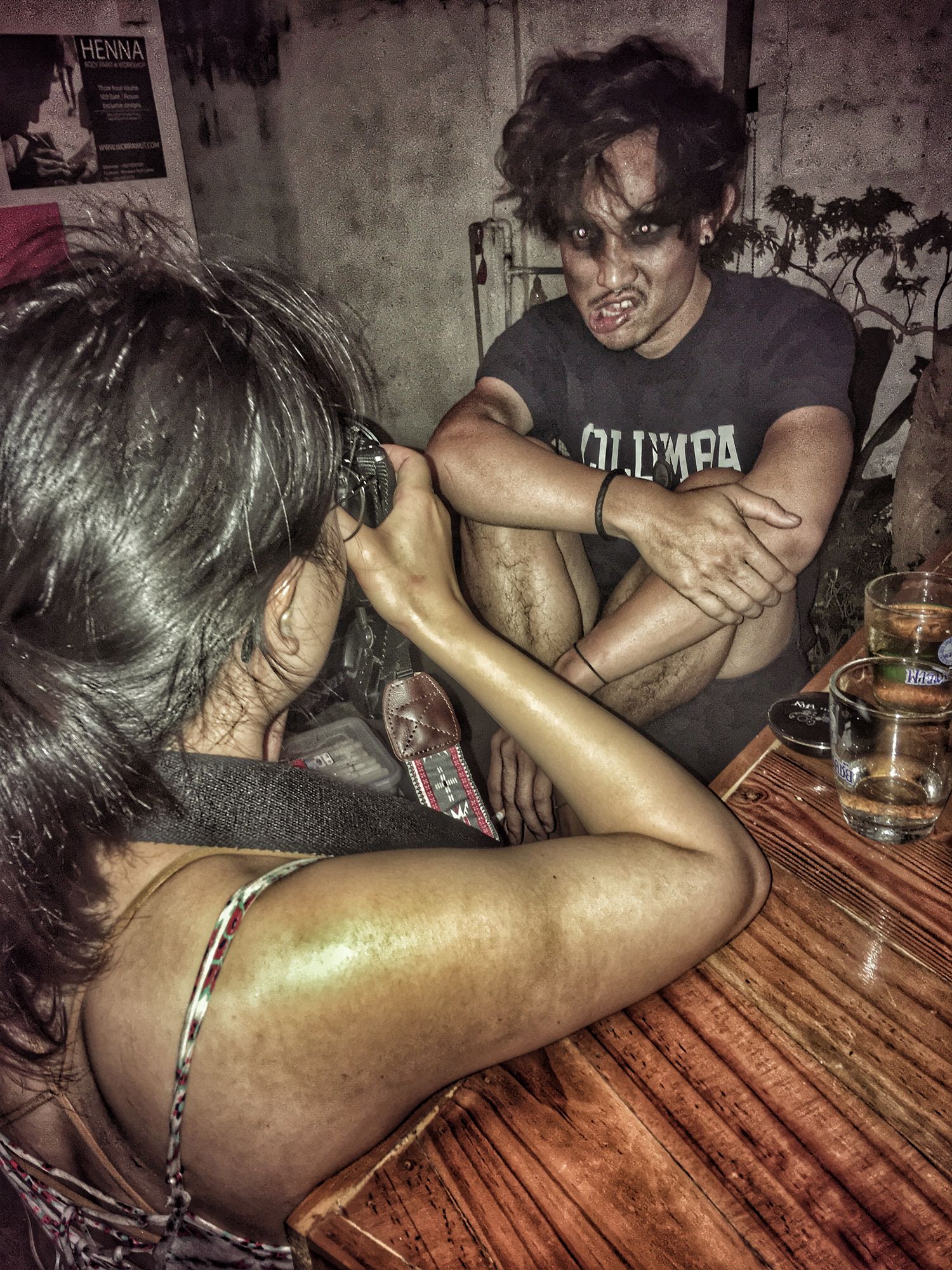 After a full week of great party beach time at Koh Samui, I moved to the north to visit the city Chiang Mai. From different sources I’ve heard that this is the hipster backpack paradise and I couldn’t wait to see this with my own eyes. The difference from the touristic locations of the south you can experience after landing already – a cab to your hotel in the centre will cost you 150 Baht (4 EUR / 100 CZK), instead of 600 (16 EUR / 414 CZK). The brutal heat as well as the fact, that this is a city with one public park led me to visit the gym straight after arriving at the guesthouse. The city of one park and one national park. National park Doi Suthep is the city’s jewel, but about this later.

„Life is short but beautiful!“ – Eric

It is funny how your life can turn into a different direction within seconds. It all started with washing and drying my dirty stuff (sweaty running clothes and the humidity in 35 Degrees of Celsius, a killing combination). While sitting at the dryer, I noticed a blond European girl who tried to tap some water from the water machine. We chatted a bit and it turned out that Claudia lives in Vienna and before that was living in Chiang Mai for six months. This is where she met her Thai boyfriend whom she met, wait for it… in the park!! Not in the national park, in the only one city park. The guy’s hand is currently bandaged as he tried to box against a wall (I am told that this is how Thai people reveal stress), but he is refusing hospital (again typical for them, I am told). They plan to go for a beer tonight and that is enough reason for me to not miss the chance to hang out with some locals. At half past seven I am already sitting on a scooter of a questionable quality, behind a little fat guy (this is how our boxer described the situation), while me being slim and fit. Claudia’s boy has an extraordinary smile. Funny and great guy. I have been around in Asia for one week only, but this I love! How they can smile, directly and honestly, then they slap your back and you know, this is open and direct, from their hearts. They are laughing, you are laughing, no one understands a single piece… but that doesn’t matter. Claudia speaks Thai fluently, she learned with him. Only if the guys want to discuss something secret, they speak in some mountain language, apparently a combination of Thai, Tibetan and Chinese. You are lost, only few times you can catch “bum bum”, yes, that is an internationalism which by now also Slovak and Czech people understand.

Arriving at the street bar, there is no place, but the lady is smart, she lays a new table on the other side of the street. This makes me think, where in Slovakia the owner of a pub would set an additional table, while being fully booked. And with a smiley face. If such pub exists, do let me know. We order beer, there is always a choice of Leo, Singa and Chang. I like Singa the most (“all the singa ladies, all the singa ladies). All four of us are dying of hunger and our boxer takes the food as his task. Wondering, where the spicy papaya salad guy is – this is his time and his place – one phone call makes it possible. Few blocks from us. He jumps on the scooter and tells me something, his body language tells me I should join. I do, without a helmet and with a guy with a bandaged hand, here I go. Arriving just on time, the salad almost ready, I add few of these grilled meat sticks, the typical street food you will find at every corner in Thailand. We get on the bike again, in one hand the food, with the other hand trying to hold the bike holder. He is telling me something, but I don’t get it – he just wants to tell me that we will stop by for some more rice and something else with meat, which figures out later to be the spiciest dish of the evening. Even more than the papaya.

Getting back to our table, two more people are sitting with us: small Chinese girl, who speaks English quite good and who worked in the city but terminated the job thus needs to return home and a domestic artist and gay in one person, Eric. Eric seems to be a funny guy, during the entire evening he amuses the others, is constantly screaming at someone, makes jokes out of tourists (asks for their trousers for example). Of course, he knows Slovakia, he is from there too. The whole evening, he keeps mentioning how bad it is he is still sober, apparently the biggest alcoholic in the town. Somehow funny. The Chinese girl mixes Slovakia with Slovenia, but that‘ fine. I don’t know her city neither and they are much bigger than us. We start eating, with our own hands! Which I haven’t washed for two hours (the bike ride including), now I start to remember all the warnings from the doctors and in my mind, I pray. No, I am not going to take out my disinfection here, they will be joking or feel offended. I am not going to risk any of these, better I shit myself full in the morning. And if not, then I will survive everything else during the next 11 months! The food tastes spicy and I have to use beer to eliminate the spiciness at least a bit. Though it is very good, and I am getting full. The last bite pays it back, apparently, I have eaten a chilly. The heat in my mouth is indescribable, I drink a lot of beer. Almost dying but the locals have a lot of fun. The pain starts give up after 20 minutes and half a litre of beer. When eating something really spicy, you have to go to the toilet and breath out the spicy taste down the flush bowl, at least the local recommendation says this. Who knows… In Thailand the beer is served with ice, if the large bottles are on the table you never drink it alone but share. Not like at home, where one beer equals one owner, and everyone keeps a very close eye on it. If there is some ice left, they eat it. Don’t get confused if they lick, bite and chew something all the time, it is the ice. Well, better than chips, or. It is also important to mention, that the concerns at home about the ice are not relevant in Thailand. The ice is produced from a drinking water and distributed every morning.

Another girl is joining, an English teacher from Canada (she teaches Chinese students online). My Canadian joke about teaching the Canadians real English remotely is not understood, but she is really nice. Didn’t know Canadian girls can smile so nicely. Eric invited us to his home, finally I end up during my first night in Chiang Mai at the house garden party, with 9 unknown people, in something which reminds on a very cool garden bar. Yes, the number increased, a French guy and a Thai guy joined later. Both ok but especially the Thai guy – he looks like a real Indian and smiles all the time. I like! Chill‘ time, candles, garden bar. Great fun. Eric’s wish from earlier is listened to, he is now quite drunken. Very creative, he starts to make-up himself (he also does hennas and different similar stuff I understood), the Chinese girl takes out her mirror camera and starts to take pictures. At the bar, at the street, on the chair, on the ground. He wants to „add something really crazy to his Instagram“. Objectively, few pictures are really good.

The evening is running in a friendly way, until it slowly finishes. After few beers, our drivers take us back to the guesthouse. I go to bed around midnight and going through the evening repeatedly. Realising, that I caught myself few times during the evening looking at the stars and silly smiling. Just like this, without a special reason. Yes, this is what happens to you when you are happy. 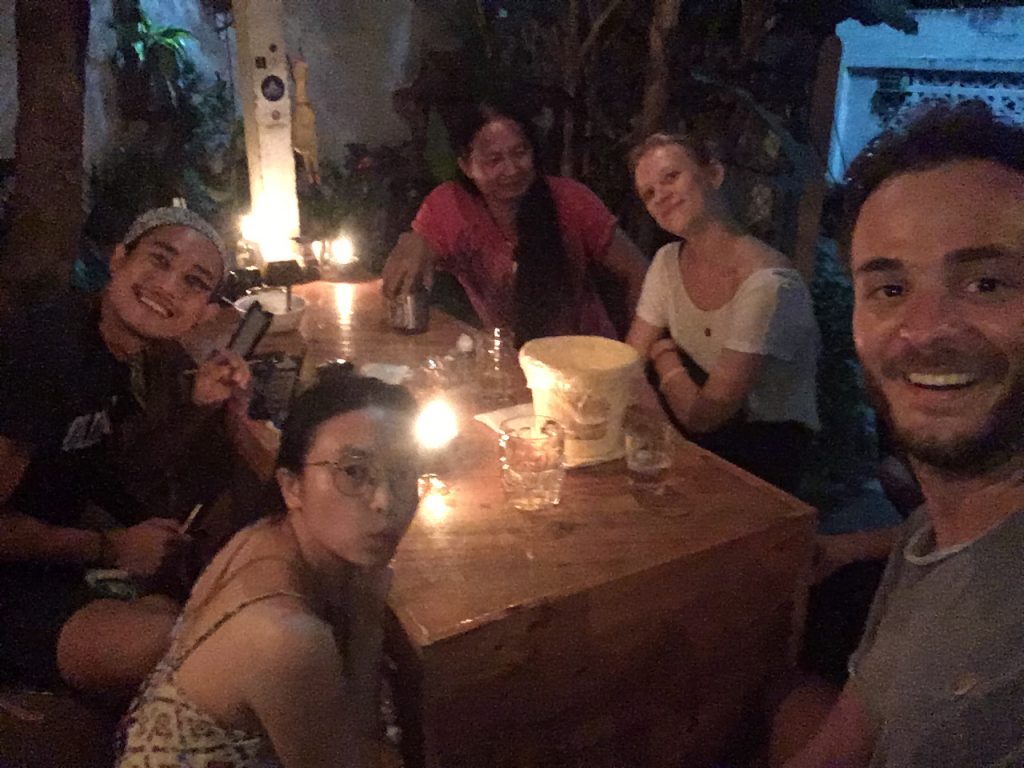 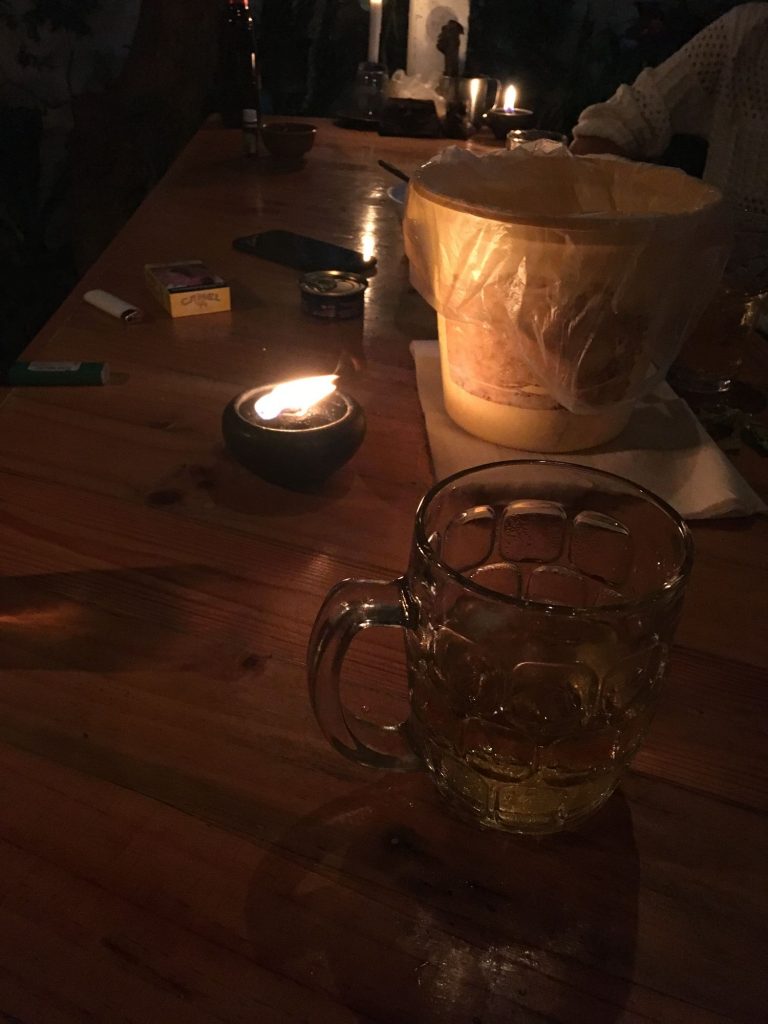