www.forbes.sk: He took a sabbatical of one year and now he is running around the world and for every kilometer he donates to charity

He had a good job, a promising career, but at one day he decided to take an annual sabbatical and literally ran out to the world. During his world travel, which can be followed on his Instagram, Facebook or webpage Runeller, he runs and donates to different charity projects at places he is visiting. Until the end of his project he should be able to run 1111 kilometers in different countries of the world, including Thailand, Myanmar, Australia, Japan, New Zealand or Canada.

As of today, Matej Šemšej already visited 13 countries and he still has 5 more to see. At the moment of our interview he was in Japan, not far away from Hiroshima and he just finished his run at the ground, which was hit by the atomic bomb in 1945.

„It is not my goal to save the world, I will be satisfied, if I only change it a little. If few people will read my articles and decide to donate with few Euro. Or if someone whom I will inspire will do something good the next day.“

Matej Šemšej is from Bratislava and already during his university he started to work in HR. He has worked for 3 American IT corporations, in the last one he was during the last 5 years responsible for the overall HR strategy in Czech Republic and Slovakia, in total he and his team took care about 1000 employees approximately. 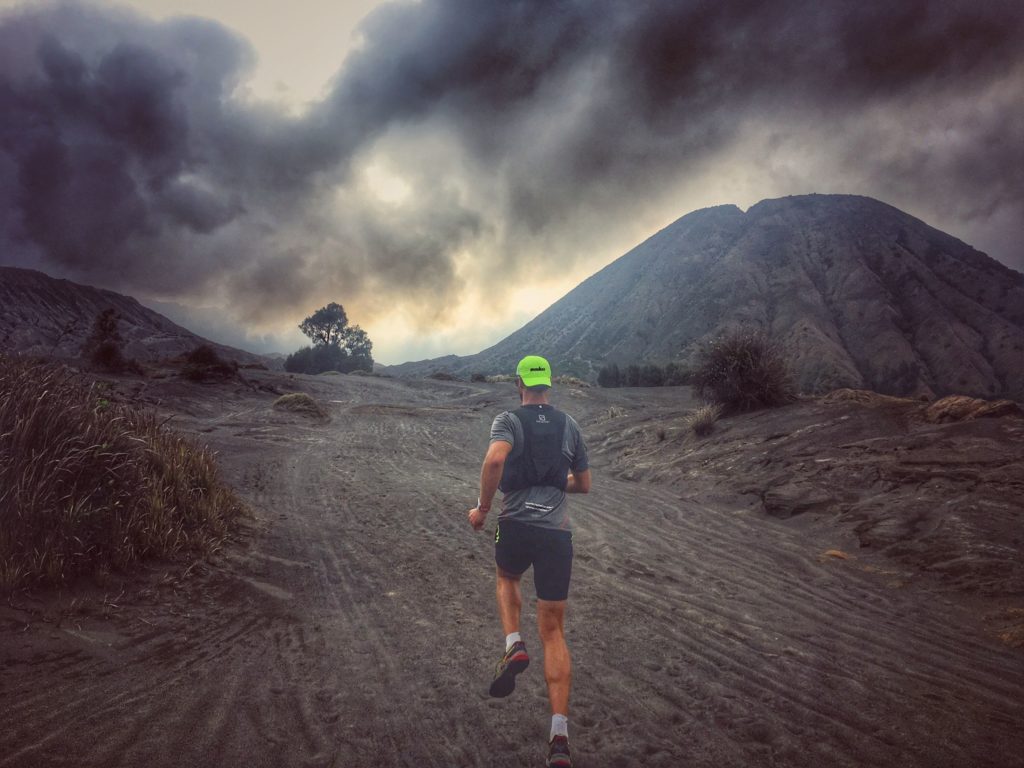 However, he felt, that he must change something in his life and settle his thoughts in his head. He agreed with his employer on a one-year unpaid leave. Since he liked to sport since he was a kid – he is an active runner and does triathlon too – he decided, that he will not only travel, but also run and help people who need help.

As a runner, Matej completed 15 marathons and more than 30 official half marathons. Since 2015 he also dedicates his time to triathlon, he completed already 2 long and 7 half distance triathlons.

His #Project12months he called Runeller (combination of English words „runner“ and traveller“). He kicked it off last September 1st, during the following 10 months he planned to run and get to known different countries. Last 2 months he wants to spend back at home, in Bratislava. „I simply want to enjoy the summer at home how I remember it from the times, when the water at the lake and the hair style in the evening Bratislava old town was more important for the young people than anything else.“ About the reason for his Project 12 months he talked to Forbes at the beginning of March.

Tell me briefly, what is the project about and what is its main goal?

#Project12months is part of the Runeller.sk and Runeller.com platform. I started it on 1 September 2018 and initially, it was supposed to fill the 12 months of my sabbatical leave. Originally it was supposed to be about travelling, running and helping in different corners of the world. This plan was supposed to cover 12 months of my life. I didn’t find it reasonable to take a backpack and travel, I needed some vision, goal, some higher sense. After first 6 months I found out, that I didn’t start a project for 12 months, but more for a whole life. I started something which is fulfilling me a lot and until I will be able to run, cycle, swim, or simply just walk, in other words able to collect kilometers for charity, there will always be Runeller. 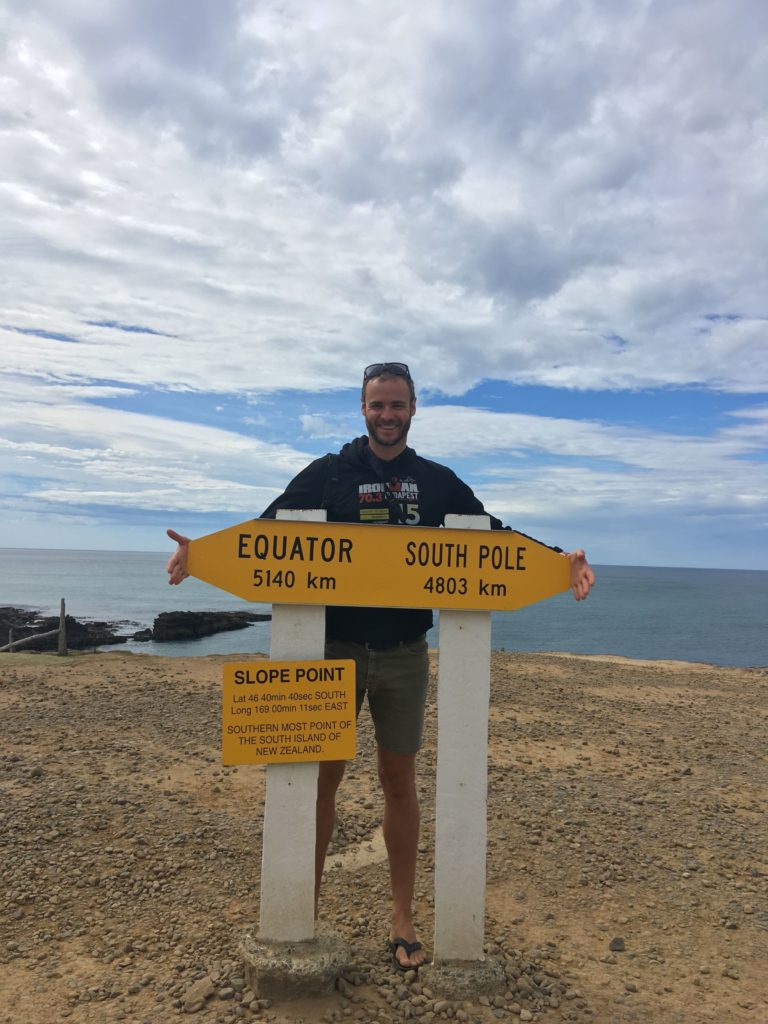 Tell me more about yourself. Who are you and what have you done before you created this project?

I come from Bratislava, where I studied at the Faculty of Pedagogics, History and German language. I continued with history after I graduated, while working full-time I completed two doctor degrees. Being a „Husak’s child“, I was born in 1982 and in my 26 years I moved to Prague. When I talk to people from different countries during my travels, I always mention the word combination “my countries”, I consider today Prague being my second home and a city which has its place in my heart.

How did you start with sport?

I did sport my whole life. Until the age of 18 I played soccer, later I spent years in the gym, in 2009 I ended up with running. In 2015 I added triathlon to it, I always dreamed about the Ironman race. As of today, I completed already 2 of them and 7 half distance triathlon races – a beautiful one was the one I completed during my stay on New Zealand. I also completed 15 marathons, something more than 30 official half marathons and many other shorter races.

Your world journey has a charity aspect. How do you collect the contributions from others and how do you know, whom to help in what country? Do you make the decisions on the spot or do you plan it in advance?

All the projects I completed during my travel and all I will complete in future have one common aspect – they have been recommended to me by some other person I fully trust. It is very important for me to know, that I can fully trust the activity, group or organization, that it is transparent, fair and „clean“, the same time the person who is recommending should be able to put her/his “hand into the fire” for the project too. I always try to find as more information as possible about the organization, I am in direct touch with its members, I try to meet them always in person. I also completed projects, which were not about any official organization but about a physical person, who again have been recommended from someone I know.

How are you doing in this sense?

The effort pays off, so far, every project had some other people contributing, whether it was my friends or people I know or even people I never met and they started following me on social media. Asking people for money is not my primary goal, on the other side I feel fulfilled with happiness when I see, that there are people who are not reluctant about someone’s destiny, someone they never met, they will never meet and who often lives on the other end of the world.

Describe some specific example. What have you achieved to change?

For example, the project in Myanmar, where I visited a children’s home near the city Yangon. Kids, who receive only one meal per day (!), can enjoy today their own small garden, which is a source of nutrients important for their growth. What was needed was not much – few people, who cared about their destiny and not even 500 Euro. No one should ever tell me, that few people cannot change the world! 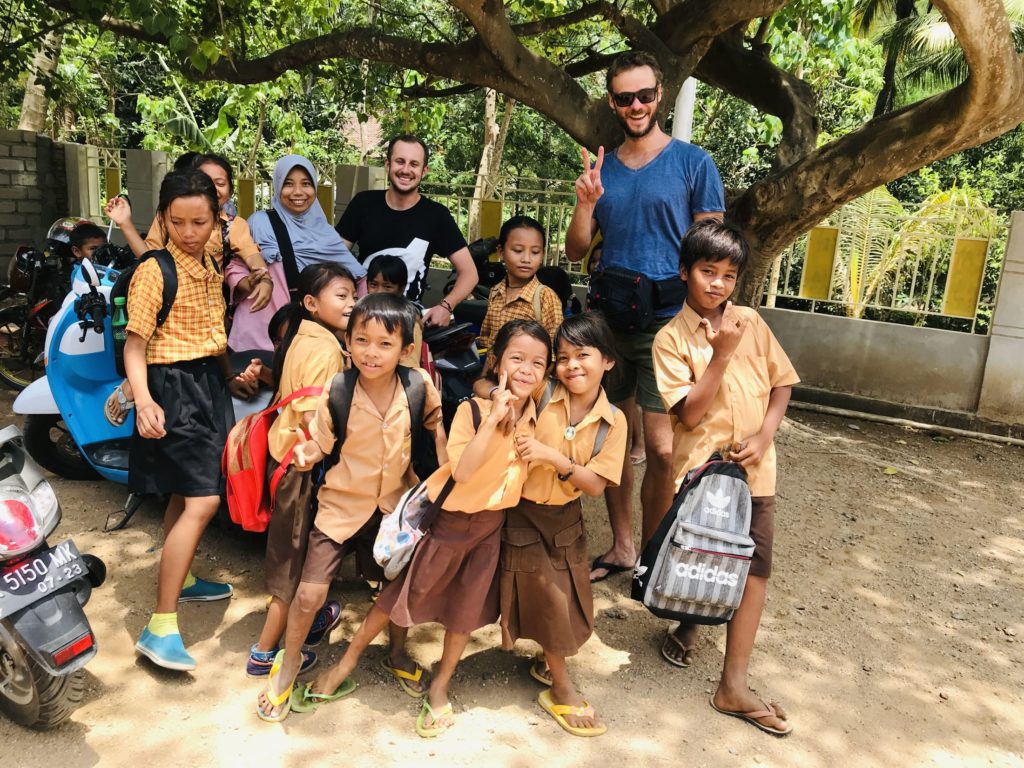 How many countries have you already visited and how many kilometers have you ran?

During the first 6 months of the project I visited 13 countries and till the end of April, when I will return home for a while, I will visit 5 more. After I finish my 10th Prague marathon I will visit few more countries in Europe and finish with my trip in Canada and USA.

Where are you now?

At this moment (8 March) I am in the Japanese city Himeji and I completed since the beginning of September 1090 kilometers with running, 99 with swimming and some also with (rented) bikes, in total 319. Sometimes I simply add to the running kilometers also the other sports, especially when I lack running kilometers for a project. One kilometer equals to one USD, which I pay from my own pocket. Contributions from others are welcomed, however the same important it is to write about the problems, this is the reason why I created my own web and I am active on different social media. When I started the whole project, I had a vision to complete during the first 8 months, which I will spend in Asia and Pacific, 1111 kilometers. Most likely I am going to achieve this. 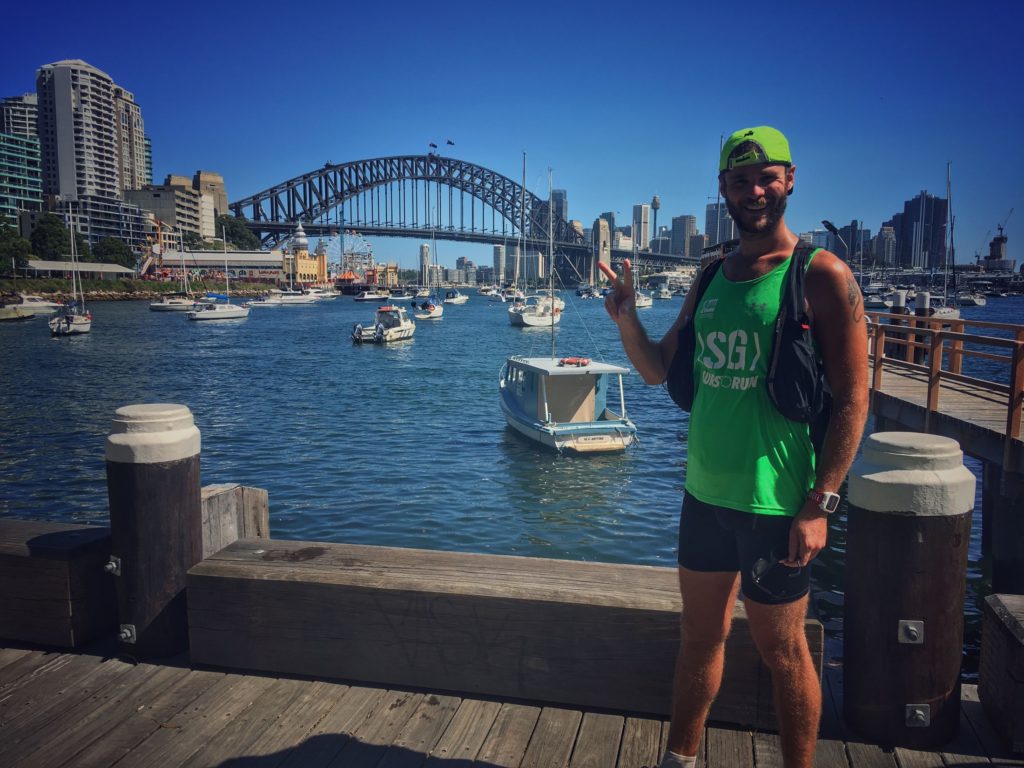 What country was the best so far? If it is possible to say like that…

It is not. The shortest answer to this question takes me usually around half an hour. It was beautiful to say goodbye to Europe, it is somehow strange to leave your home and know, that the next half a year you will be only watching what is happening there from another end of the world. Thailand is an entry gate to Asia, perfect for adaptation of less experienced travelers, as it was also in my case. Myanmar is one of the last countries in Asia, which is not influenced so much by the tourism, the people there are unbelievable friendly. On the other side, there is no democracy as it is proclaimed by the government, I experienced for example secret police visiting one meeting of different charity organizations. Visiting a kid’s home here will change your life. Everyone, who complains back at home should visit Myanmar for 3 months.

How about other countries?

Vietnam will stay in my heart as well. I had the luck to find a girlfriend here and for a moment it looked like a happy end too. Which didn’t happen at the end, but it was an important and beautiful experience, which I don’t regret. On the Indonesian island Lombok, I trained with professional runners from Kenya. The beaches of this island evoke heaven. In Cambodia I was very touched by the tragic history of the country from the Khmer Rouge regime, few weeks I didn’t live with any other topic, well, except running. In Singapore I did said goodbye to my past, in Malaysia I scored on the rank 27 during a half marathon race with 4500 runners. Australia is everybody’s dream country and New Zealand, that is the end of the world but so stunning, that you don’t want to leave. And people here are so friendly and kind. And currently in Japan I had the opportunity to run on the ground, which was hit by an atomic bomb. That much and much more happened in 6 months, how should I chose the best experience or country? That is not possible. 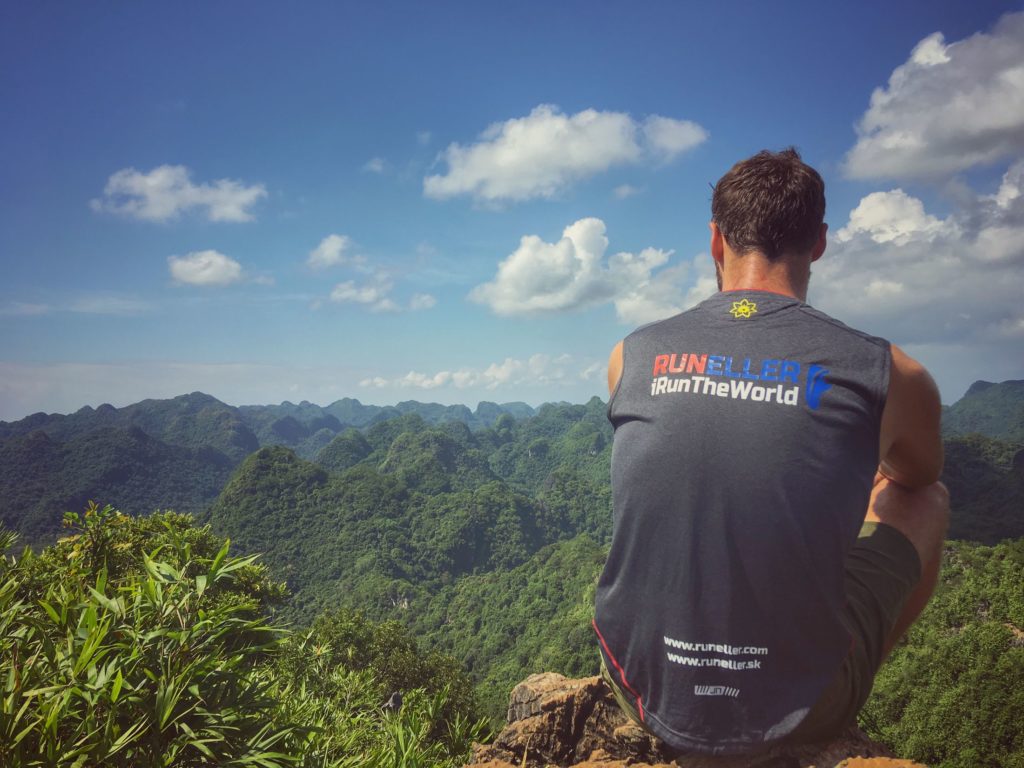 What would you like to accomplish with this project?

It is not my goal to save the world, I am fine to change it a little only. When few people will read my articles and decide to donate few Euro. Or if someone inspired by my story will do something good the next day. Or if he or she just takes a think and realizes, that back at Europe we don’t have a bad life at all, that it is all about us and inside us. I dream about a world, where we don’t know human hate, animosity and intolerance, a world in which we respect, protect and love. Ourselves, nature and our special planet. I know this is utopia and it will never happen, however if only one person decides to think more positively, if only one person changes something, I will tell to myself that it all had a purpose.

And how about your future? Are you planning to return to the corporation, when this 12-months project is over?

As I already mentioned I am still employed, the answer is yes. I miss the people I worked with and I will not lie, travelling the world for one year does cost something too. Last but not least I am curious to see, what will happen, if I will be able to continue in the company, or I will be searching for some other sense of my working life. And if the company will be interested in my service after one year. The time will show. Everything in life happens exactly the way it should happen.