The hell of the Singapore marathon 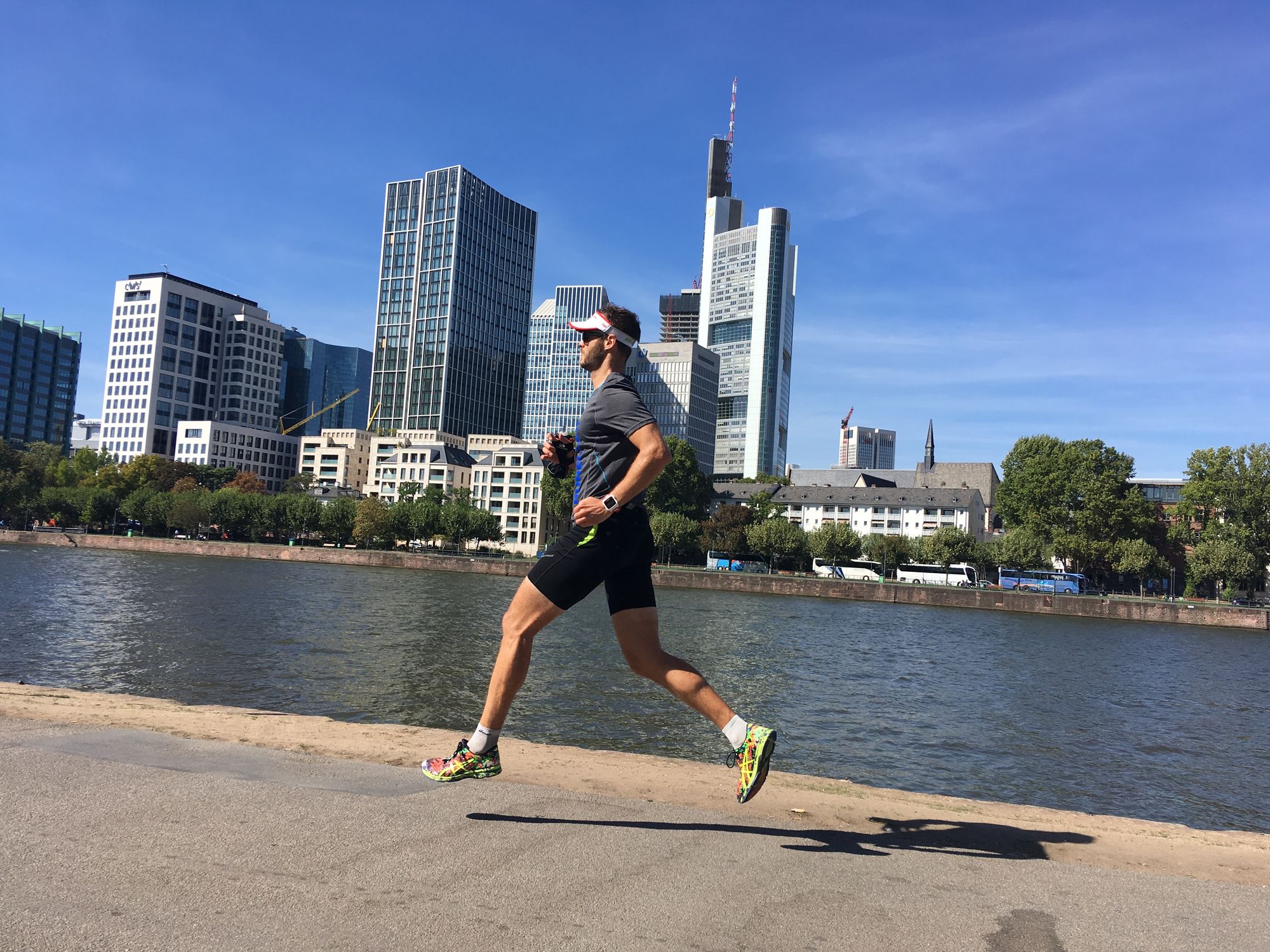 If you like running through the nicest parts of the city, running through the centre of Frankfurt is something you shouldn’t miss when visiting this city. I started my 15K run behind the Old Opera (Alte Oper), former main opera of the city. Inaugurated in 1880, it was later destroyed by the WWII bombs. Re-built in the 70’s of the 20th century, it was again opened in (1981). In the centre of Frankfurt, you will find the Green circle (Frankfurter Grüngürtel), which is a green part of the city in the total expanse of 8 hectares, crossing through its centre.  Opened in 1991, it was one of the first systematic green city circles in the world. You may join the circle right behind the opera as I did and then you only need to keep running where your legs will be leading you. Few hundred meters later you will arrive at the tower Eschenheimer Turm, which is a former city gate built in the 15th century. It keeps being the most preserved landmark of the medieval city in its original shape and without changes. If you are a kebab-lover, there is a very good one at the crossroad in front of the tower. Had the pleasure one day ago. 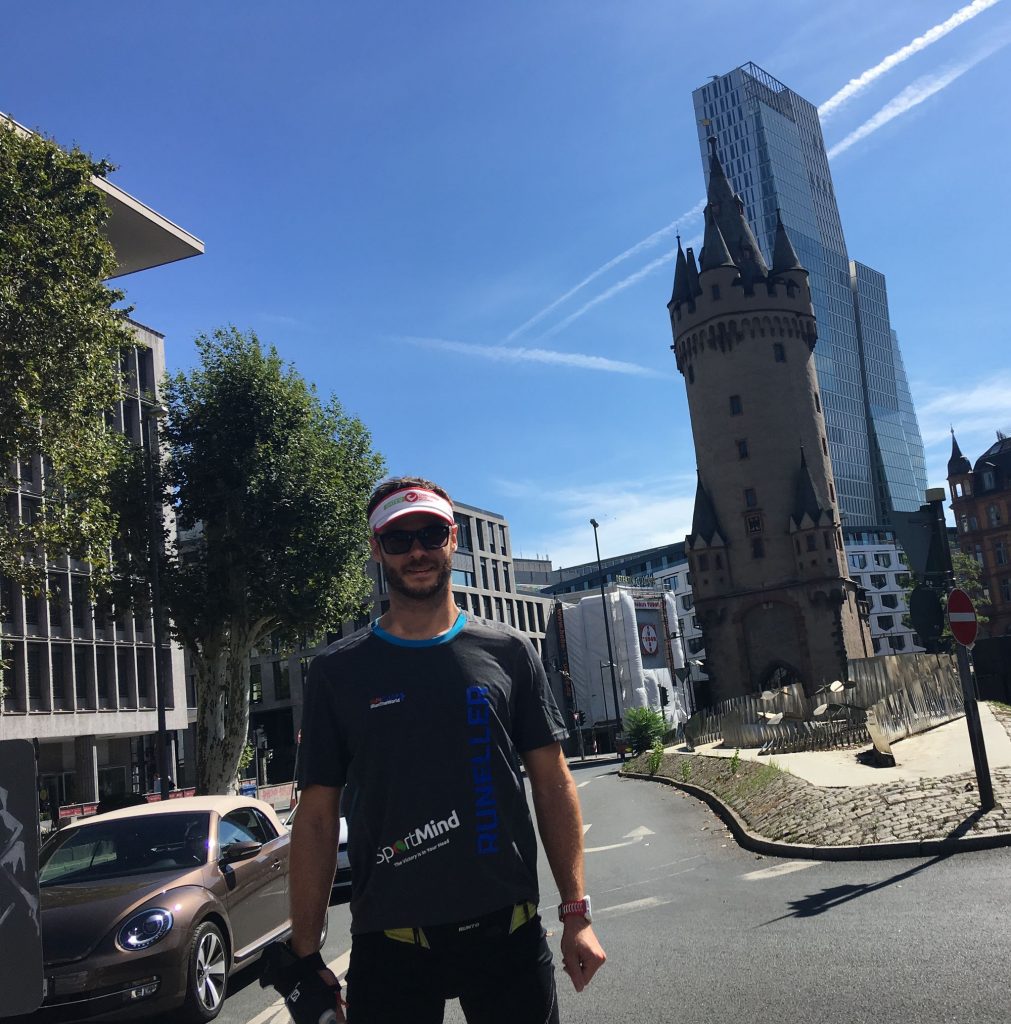 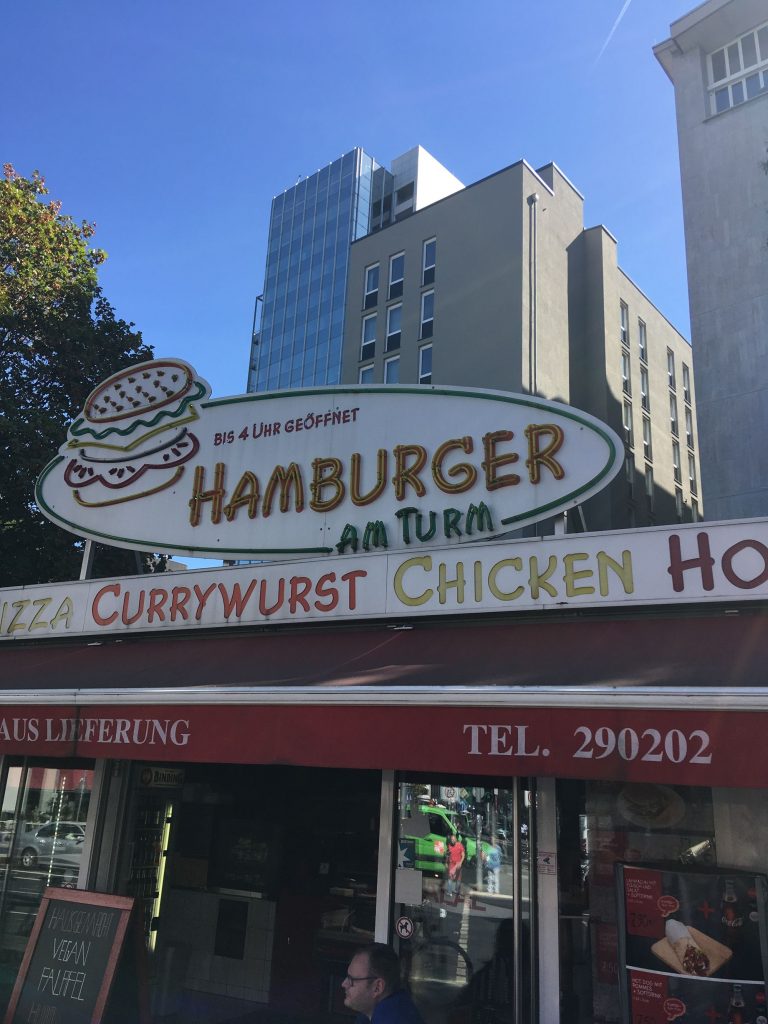 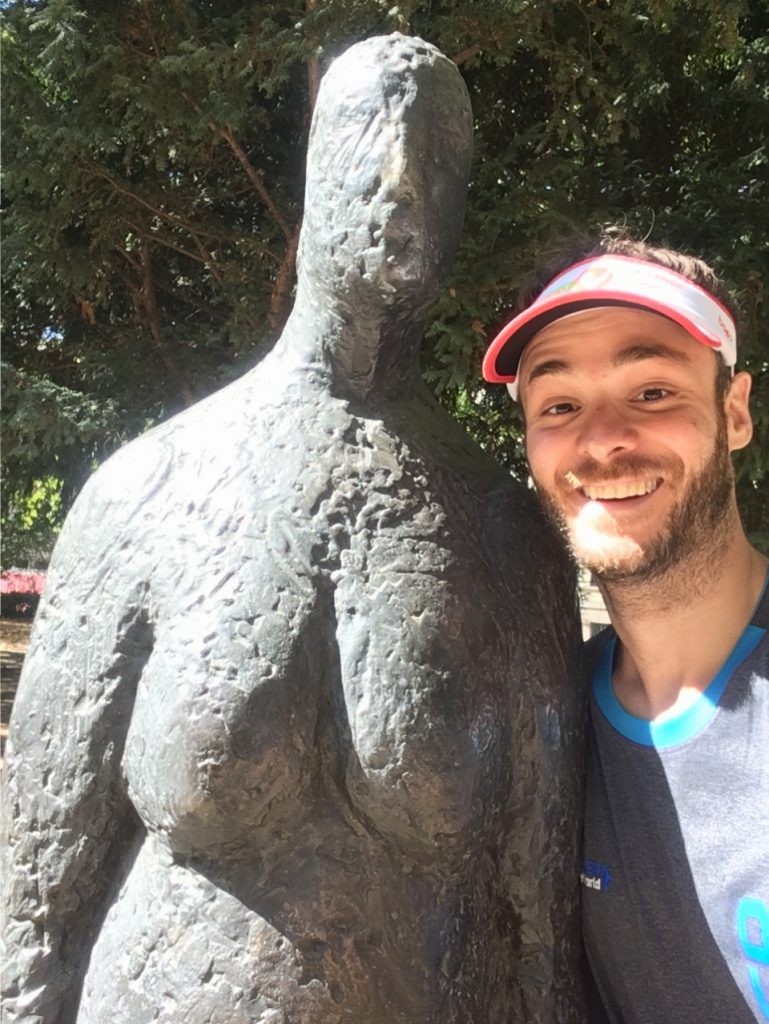 Leaving the tower, I continued through the circle and arrived at the Garden of Heavenly Piece (Garten des himmlischen Friedens). This is a small park with a Chinese garden, which was built by the city in 1985 on the place of the former Bethmannpark. In this, already 200 years ago a family of the same name the east Asian flowers had growing. Silent and useful place, hidden from the city’s rush life. After 3 kilometres I arrived at one of the city’s bridges, Flosserbrücke. It is the only stabilized bridge of Frankfurt’s oldtown on the pylons. First bridge at this place was built in 1964, the current bridge got its shape with the construction between 1984 – 1986. 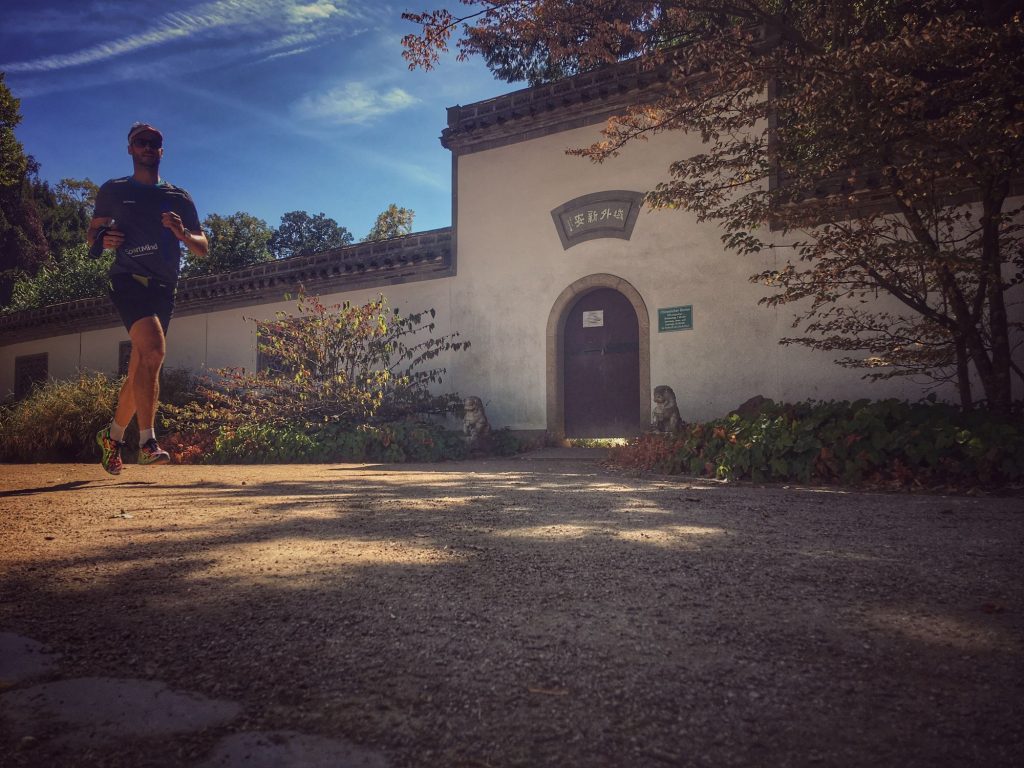 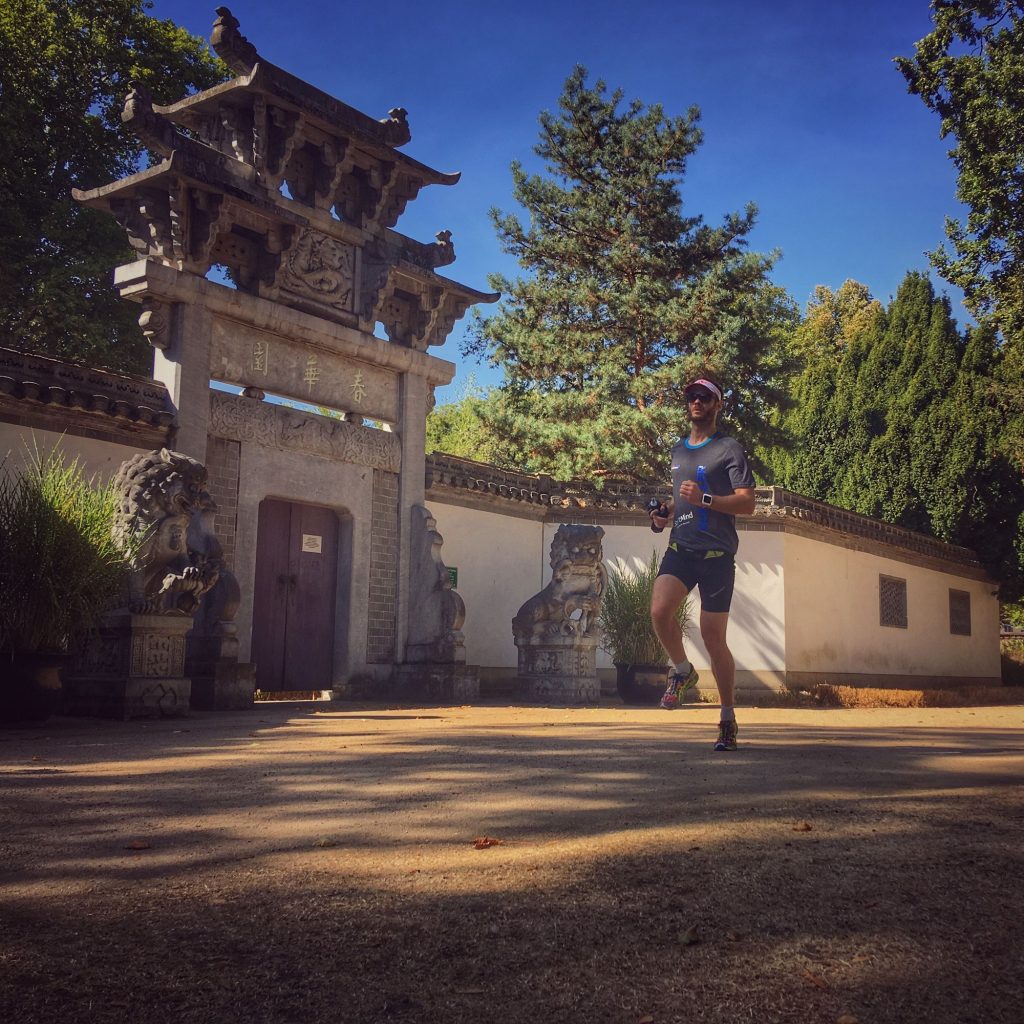 I ran to the other side and continued on the promenade with the direction leading out of the city, I wanted to shoot a picture with the European central bank based on the other side. The bank is the main institution for the Euro currency and one of the most important central banks in the world. After approx. 2 kilometres I turned and ran back, through the Museum seafront. Above the promenade there is a complex of 15 museums which will satisfy every visitor. Few kilometres more, I crossed to the other side through the Bridge of Peace (Friedensbrücke), built in 1950-1951 at the spot of the former Wilhelm’s bridge (Wilhelmsbrücke). Running back to the city, I decided to run into the old town, despite the high volume of tourists. I ran to the square Rome hill (Römerberg) with the city hall, that is normally called The Romer (Römer). The city hall has been established in the 15th century and the square is often the place for different events (historical coronation, Christmas markets etc.). I continued to the Dome of St. Bartholomeus (Kaiserdom St. Bartholomäus), the symbol of the national unity in the 19th century. Today’s dome is the fourth church institution at this place during the city’s history. From here I ran to the large square Hauptwache and from there to the shopping street Zeil. Running here, be ready to squeeze through all the people, however it is an experience worth. If you continue this street, you will hit the green circle again, I re-joined it on the place of the Garden of Heavenly Peace. 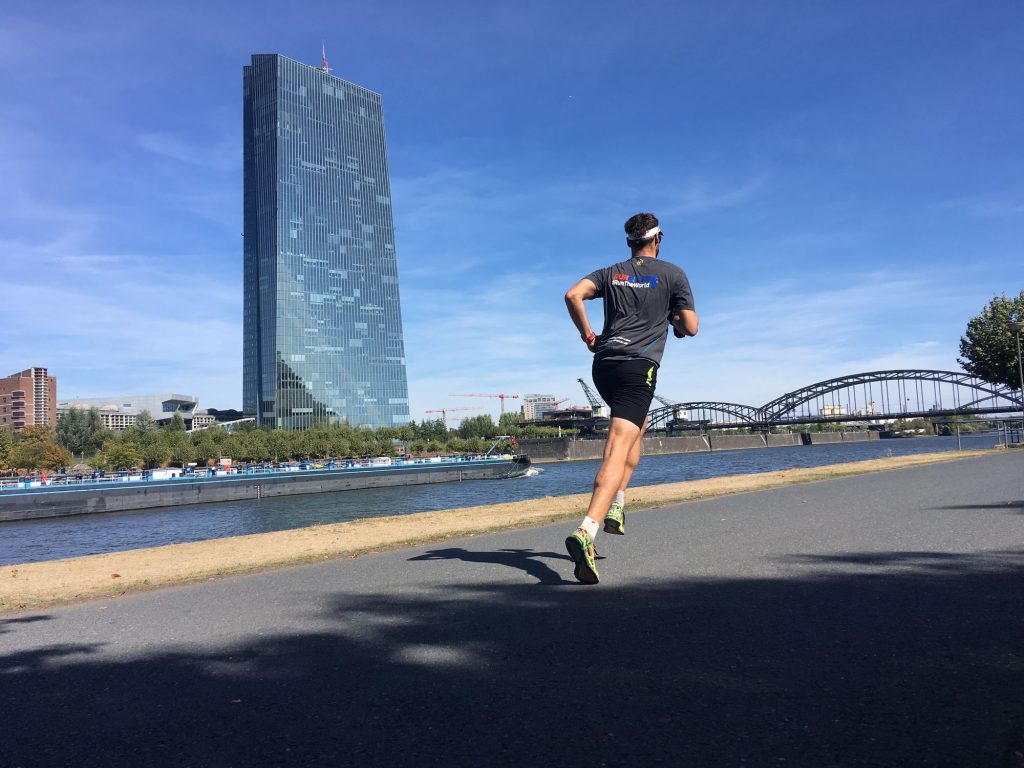 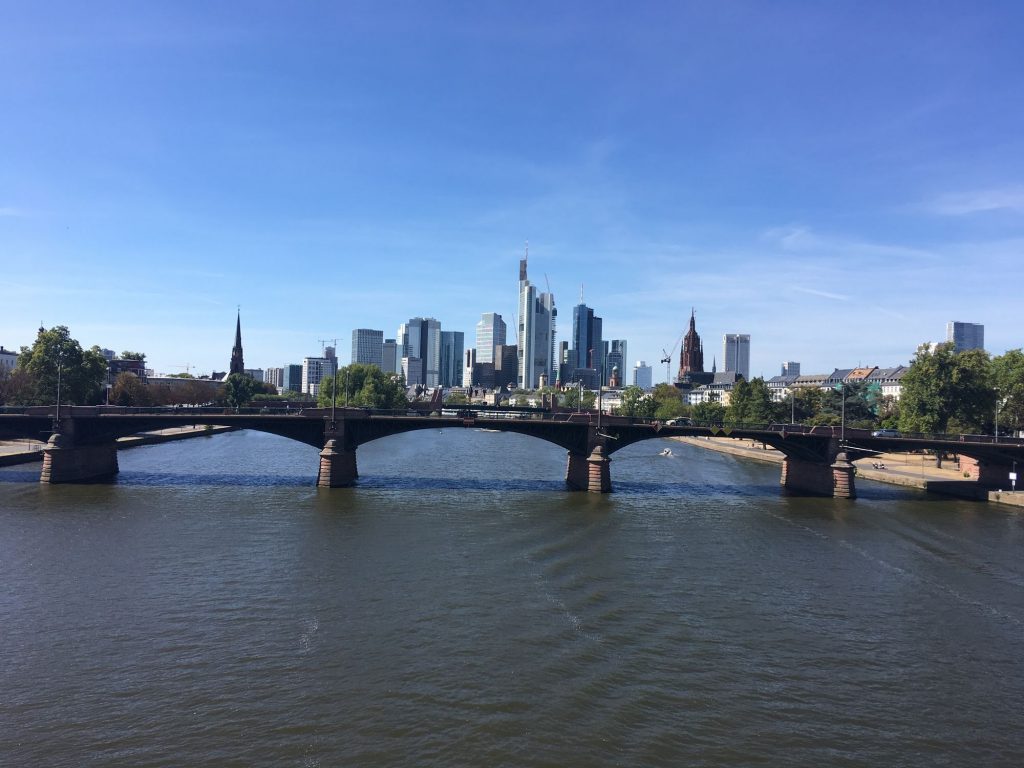 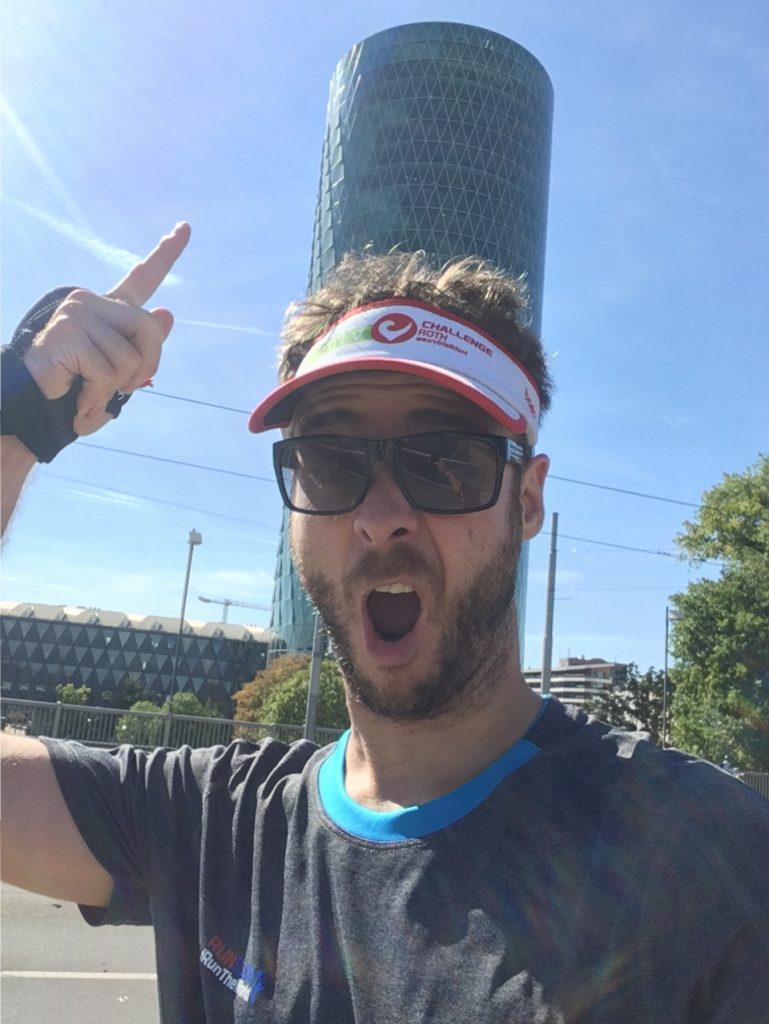 The 15 kilometres measured you can easily shorten (or make them also longer), some parts of the city are really worth to see. Goodbye Frankfurt, I will be back (one of the Germany’s best Ironman races is happening in Frankfurt every year).